Foreign Minister Kono Pays a Courtesy Call on His Majesty King Abudullah II, King of the Hashemite Kingdom of Jordan 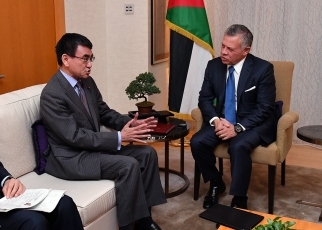 On November 27, commencing at 4:40 p.m. for approximately 20 minutes, Mr. Taro Kono, Minister for Foreign Affairs of Japan, paid a courtesy call on His Majesty King Abdullah II ibn Al Hussein, King of the Hashemite Kingdom of Jordan, who is paying an Official Working Visit to Japan. The overview of the courtesy call is as follows.

1. Minister Kono welcomed His Majesty King Abdullah II’s visit to Japan. Minister Kono stated that Japan would like to contribute to the stability of the Middle East region with Jordan, an important partner with which Japan has a historically friendly relationship, that stability in Jordan is essential for regional stability, and that Japan would continue to extend possible assistance to secure social and economic stability in Jordan and support its further development.