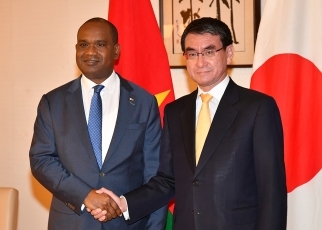 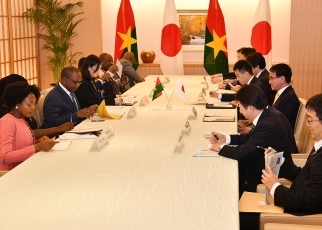 On November 19, commencing at approximately 3:05 p.m. for around 30 minutes, Mr. Taro Kono, Minister for Foreign Affairs, held a foreign ministers’ meeting with H.E. Mr. Mamadou Alpha Barry, Minister of Foreign Affairs of the Republic of Burkina Faso, who is accompanying His Excellency Mr. Roch Marc Christian Kaboré, President of Burkina Faso, on the president’s official visit to Japan. The overview of the meeting is as follows.

1. Minister Kono welcomed his reunion with Minister Barry after the two ministers met last October on the occasion of the TICAD ministerial meeting and stated that the realization of the president’s official visit to Japan is delightful, and that Japan emphasizes its relationship with Burkina Faso, which has been making efforts to ensure peace and stability in the region. Minister Kono also stated that he would like to exchange views on a broad range of fields toward the Japan-Burkina Faso Summit Meeting and develop bilateral relations further going forward. In response, Minister Barry expressed gratitude for his invitation to Japan this time and Japan’s support for the security field and the development issues of Burkina Faso.

2. The two ministers reaffirmed that Burkina Faso has played an important role in the project on the Corridor Development for West Africa Growth Ring and that Japan will contribute to the reinforcement of regional connectivity and the sustainable growth of Burkina Faso through developing quality infrastructure. The two ministers also reaffirmed the necessity of improving the business environment to further promote Japanese companies’ investment, taking the opportunity of the Japan-Burkina Faso Business Forum, which was successfully held, and the role of education and vocational training as the basis of nation building and economic and social development. The two ministers also welcomed the signing of the Japan-Burkina Faso Technical Cooperation Agreement. In response, Minister Barry stated his expectation on Japan’s continuous support in road construction projects and education. Furthermore, the two ministers confirmed their cooperation for the success of the seventh Tokyo International Conference on African Development (TICAD7).

3. In addition, the two ministers exchanged views and affirmed their collaboration on issues such as cooperation in the international arena, including United Nations Security Council (UNSC) reform.