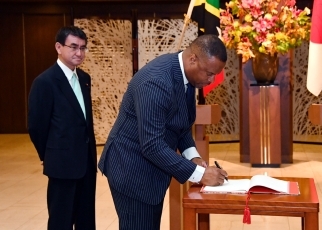 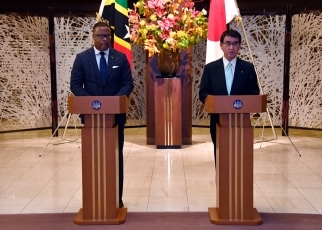 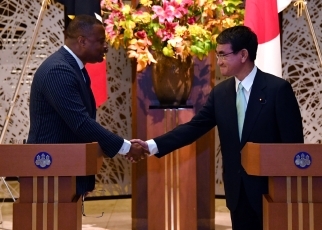 On November 2, commencing at 7:40 p.m. for approximately 70 minutes, Mr. Taro Kono, Minister for Foreign Affairs of Japan, held a meeting over dinner with Hon. Mark Brantley，Minister of Foreign Affairs and Aviation of St. Christopher and Nevis. The overview of the meeting is as follows.

1. At the beginning, Minister Kono welcomed Minister Brantley’s first visit to Japan. Minister Kono stated that he hoped to strengthen the traditionally friendly relationship between Japan and St. Christopher and Nevis, which is important partner sharing fundamental values, and between Japan and CARICOM. Minister Brantley expressed his gratitude for the invitation to Japan and responded that he also looked forward to deepening the bilateral relationship which has continued for more than three decades.

2. Minister Kono conveyed his decision of the relaxation of multiple-entry visas for nationals of St. Christopher and Nevis in order to expand and deepen bonds of exchange and friendship between both countries. Minister Kono also stated that Japan put emphasis on continuous cooperation with St. Christopher and Nevis that contributes toward overcoming its vulnerabilities from perspectives other than those based on per-capita income. Minister Brantley expressed appreciation for the Japanese cooperation in areas of disaster risk reduction, environment and fisheries. In addition, he stated his wish for Japan, as a friend of St. Christopher and Nevis, to be a spokesman in the international community to promote understanding for vulnerabilities particular to small island states.

3. The two ministers shared the view that they will deepen the cooperative relationship in the international arena, such as UN Security Council reform and North Korean issues.

(1) CARICOM is established in 1973 based on Chagaramas Agreement. The Secretariat is located in Guyana.

(2) CARICOM is a regional organization with the purposes of encouraging cooperation in the field of advancing regional economic integration, coordination of foreign policies, health and medical care, education and others.

(3)Member states are the following 14 countries and 1 region;

The main contents of the relaxation are as fellows.
(1)Extension of the validity period (3 years ⇒ 5 years)

(2)Expansion of the scope of applicants (lawyers, certified Public Accountants, patent attorneys, doctors, public officials and others will be added.)