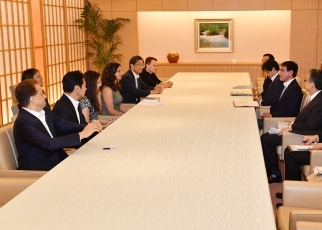 1. In the beginning, Minister Kono welcomed the “Middle East Peace Project” delegation’s visit to Japan. He expressed his appreciation for the project which provides opportunities for children, who lost their relatives in the Israeli-Palestinian conflict, to think about peace.

2. Ms. Mohar and Ms. Abu Ayyash introduced PCFF’s initiatives being carried out in both Israel and Palestine such as exchange projects among young people and education projects.

3. In reply, Minister Kono expressed his hope for Ms. Mohar and Ms. Abu Ayyash to contribute to realizing peace after going back to the region, even in the difficult situation surrounding the Middle East peace.