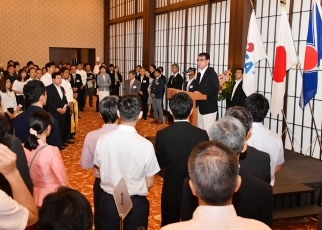 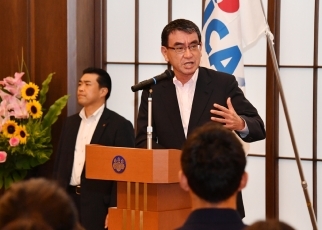 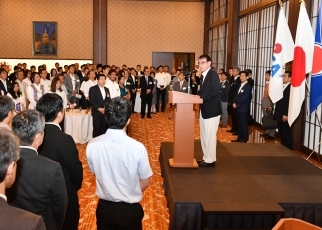 1. On July 3, Mr. Taro Kono, Minister for Foreign Affairs, hosted a reception for JICA Volunteers at the Iikura Guest House. The reception was attended by about 200 people, including about 140 JICA Volunteers who had returned to Japan following the completion of their activities, those who are going to be dispatched, as well as members of JICA Parliamentary League (Japanese parliamentary league aimed at supporting the activities of Japan's International Cooperation, especially Japan Overseas Cooperation Volunteers, JOCV), and those from private companies and organizations supporting JICA Volunteers.

2. At the opening speech, Minister Kono, touching upon JICA Volunteers’ activities, praised their contribution to Japan’s diplomacy by having played pivotal role for the development of the countries where they worked and for confidence building between Japan and those countries. He extended his gratitude to all volunteers who had already returned, who are on a mission and who are going to be dispatched. Furthermore, he encouraged those who experienced JICA Volunteers to keep contributing to Japan and the world.

3. On behalf of JICA Volunteers, Mr. Kentaro Wakao, who engaged in village development project in Guatemala expressed his appreciation for the reception. He said that he gained valuable experience by participating in JOCV, one of the JICA Volunteer programs and his current career greatly depends on this experience. Mr.Wakao hoped the JOCV would nurture various individuals who can take an active part both in Japan and the world.

4. At the reception, Minister Kono visited every table throughout the venue and interacted with the participants listening to their experiences, current activities and aspirations.