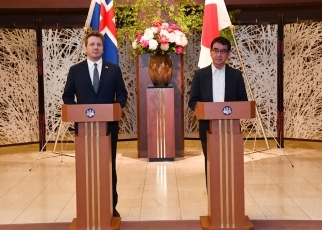 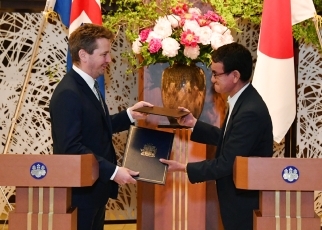 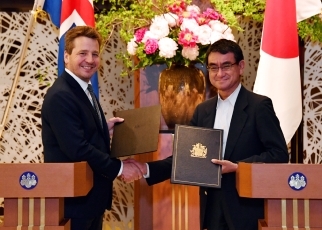 On May 29, commencing at 7:30 p.m. for approximately 80 minutes, Mr. Taro Kono, Minister for Foreign Affairs, held a Foreign Ministers’ meeting over dinner with H.E. Mr. Gudlaugur Thor Thordarson, Minister of Foreign Affairs of the Republic of Iceland. The overview of the meeting is as follows.

1. At the beginning, Minister Kono welcomed Minister Thordarson’s first visit to Japan and stated that he would like to further strengthen bilateral cooperation in a wide range of fields with Iceland, both of which are maritime nations and important partners sharing fundamental values such as the rule of law. In response, Minister Thordarson stated that Japan was an extremely important global partner sharing fundamental values such as the rule of law and human rights, and promoting initiatives for mutual national security and environmental protection. After their greetings, the two Ministers exchanged the notes verbale of the working holiday program, which will come into effect this September.

2. The two Ministers expressed their intentions to collaborate in a broad areas of mutual interest such as the promotion of free trade and investment, the Arctic region, whaling and people-to-people exchanges. In addition, they expressed their expectation for further promotion of mutual investment and economic interchange by taking into effect the Tax Convention between Japan and Iceland, which had been signed earlier.

3. In addition, the two Ministers had an exchange of views on North Korea and other regional affairs.