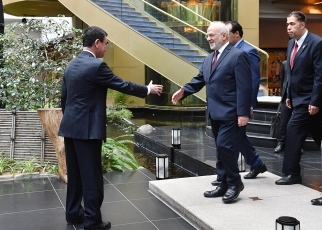 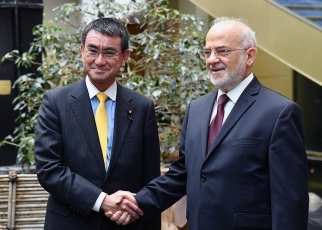 On April 5, commencing at around 1 p.m. for approximately 50 minutes, Mr. Taro Kono, Minister for Foreign Affairs, held a meeting over lunch with H.E. Dr. Ibrahim Al-Jaafari, Foreign Minister of the Republic of Iraq. The overview of the meeting is as follows.

1. Bilateral relations
Minister Kono welcomed that the people of Iraq had come together to successfully defeat the Islamic State of Iraq and the Levant (ISIL) in Iraq. He expressed a view that the 80th anniversary of the establishment of diplomatic relations between the two countries next year will be a good opportunity to make a big leap in the bilateral relationship, and stated that he intended to strengthen the relationship through activities of Japanese private companies as a driving force.
In response, Minister Al-Jaafari stated that Japan’s cooperation is necessary to advance the reconstruction of Iraq, and he intended to work hard to create a stable security situation and a favorable investment environment.

2. Regional affairs
The two ministers exchanged views on the Middle East. Minister Al-Jaafari stated that Iraq would cooperate for resolving regional issues with Japan, which is trusted and respected by the regional countries and enjoys good relationship with all the countries including Iraq. In response, Minister Kono stated that Japan would continue to address the regional issues in cooperation with Iraq.