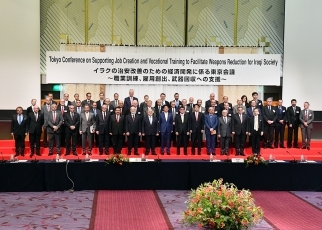 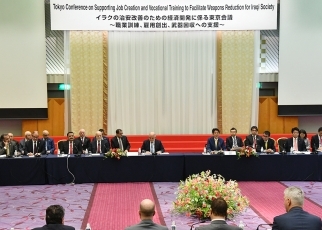 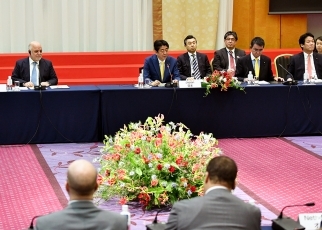 1. On April 5 Senior Officials Meeting on Supporting Job Creation and Vocational Training to Facilitate Weapons Reduction for Iraqi Society was held jointly by the Government of Japan and Government of the Republic of Iraq.

) advocating international support for the Government of Iraq’s efforts on weapons reduction, vocational training job creation under a new approach of integrating security and development initiatives, in order not to allow a resurgence of violent extremism in Iraq.

3. The meeting was also attended on the Japanese side by Mr. Taro Kono, Minister for Foreign Affairs, and Mr. Kentaro Sonoura, Special Advisor to the Prime Minister, and on the Iraqi side by Dr. Ibrahim Al-Jaafari, Foreign Minister, and Mr. Irfan al-Hayali, Defense Minister.

4. At the meeting, officials of participating countries and organizations exchanged views and presented their activities in fields such as security reform and vocational training. The joint Japanese-Iraqi initiative was widely supported by the participants. Following the discussion at the meeting, Japan and Iraq issued a co-chairs’ summary (English (PDF)