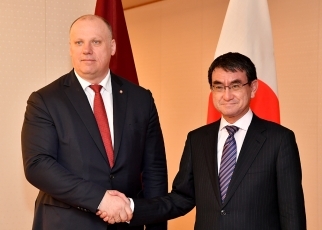 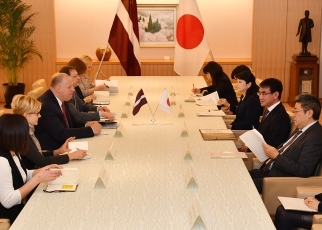 On February 27, commencing at 2:30 p.m. for approximately 35 minutes, Mr. Taro Kono, Minister for Foreign Affairs, held a meeting with Mr. Raimonds Bergmanis, Minister of Defence of the Republic of Latvia. The overview of the meeting is as follows.

Minister Kono mentioned that Mr. Shinzo Abe, Prime Minister of Japan, visited Latvia in January this year for the first time as Prime Minister of Japan, and explained that he would like to promote Japan-Baltic cooperation including by utilizing the framework of the “Japan-Baltic Cooperation Dialogue” (Note), which has agreed by the leaders to establish during Prime Minister Abe’s visit. Minister Bergmanis replied that he felt honored to be able to visit Japan, mentioning that this year commemorates the 100th anniversary of Latvia’s independence, and expressed gratitude for the support that Japan has extended since the time of Latvia’s independence.

(1) With regard to North Korea, Minister Kono explained that though North Korea participated in the PyeongChang Olympic Games, it is continuing with its nuclear and missile development programs, and he affirmed the necessity to adhere to the policy of maximizing pressure, including through the full implementation of the United Nations Security Council (UNSC) resolutions. In response, Minister Bergmanis stated that North Korea’s nuclear issue was not only a challenge to Japan alone, but also to entire international community, and Latvia was also keeping a close eye on the issue.

(2) In addition, the two ministers exchanged views on regional affairs, including Russia, Ukraine and the South China Sea.

(Note) The “Japan-Baltic Cooperation Dialogue”
A dialogue framework for promoting cooperation between Japan and the Baltic countries in a variety of fields in the future that Prime Minister Abe agreed to establish with the leaders of the three Baltic States when he visited the three countries in January this year for the first time as Prime Minister of Japan. (Participation from the public and private sectors is envisaged).