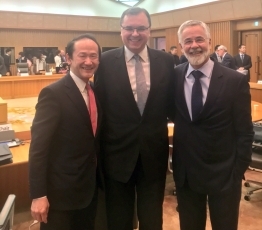 1. The 16th Informal Meeting on Further Actions Against Climate Change took place at Mita Kaigisho in Tokyo on February 22 and 23.

2. This meeting has taken place annually in Tokyo since 2002 to facilitate candid discussions among participants about climate change negotiations in an informal setting with Japan and Brazil as co-chairs. Chief negotiators on climate change and other practitioners from about 30 countries and organizations attended this year. Ambassador Hideo Suzuki, Director General for Global Issues of Ministry of Foreign Affairs co-chaired the conference and Ambassador. J. Antonio Marcondes, Vice-Minister for the Environment, Energy, Science and Technology, Ministry of Foreign Affairs, was the co-chair from Brazil.

3. The meeting served as a fruitful opportunity to share their interests and address challenges toward the adoption of the Paris Agreement implementation guidelines by 2018.

4. Japan as co-chair facilitated candid discussions among the participants at the meeting. Japan also took part in the discussions for the adoption of implementation guidelines by 2018, and also explained a number of its initiatives to tackle climate change.

5. Japan will continue to work on climate change issues so that the international community as a whole can cooperate under the Paris Agreement.