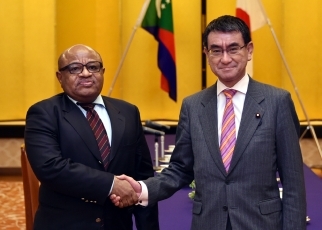 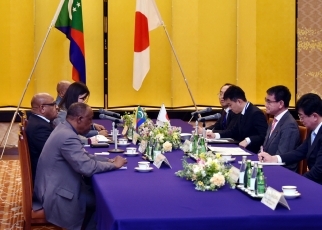 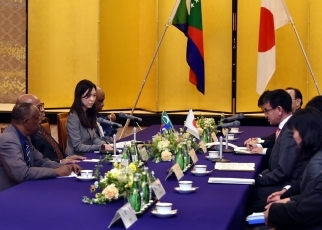 On February 6, commencing at around 7 p.m. for approximately two hours, Mr. Taro Kono, Minister for Foreign Affairs, held a meeting with H.E. Mr. Mohamed El Amine Souef, Minister of Foreign Affairs, International Cooperation and the Francophonie, in charge of Comorians abroad, of the Union of Comoros, who was making a working visit to Japan upon invitation by the Ministry of Foreign Affairs. The meeting was followed by a dinner hosted by Minister Kono. The overview is as follows.

1. Minister Kono welcomed Minister Souef to Japan and explained that Japan is promoting the Free and Open Indo-Pacific Strategy

and hopes to proactively cooperate with Comoros. He also stated that Japan supports the efforts of Comoros to realize economic independence through industrialization and to achieve political stability. In response, Minister Souef expressed gratitude for the contributions Japan is making to the development of Africa, including Comoros, and to the peace and stability of the international community. The two Ministers confirmed that they will cooperate to make the Seventh Tokyo International Conference on African Development (TICAD 7) a success, and will further strengthen the two countries’ amicable relationship.

2. The two ministers exchanged views on regional affairs. They confirmed that North Korea’s nuclear and missile development programs are a threat to peace and stability of the international community, and emphasized the need for the international community to fully implement the relevant United Nations Security Council (UNSC) resolutions and to fundamentally review its relationship with North Korea in order to maximize pressure on North Korea. Furthermore, Minister Souef reiterated that Comoros always concurs with Japan’s position on this matter.

3. In addition, the two ministers shared the intention to promote the UNSC reform. They also exchanged views on cooperation in the international arena.