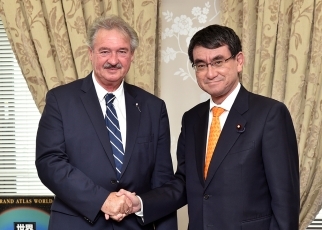 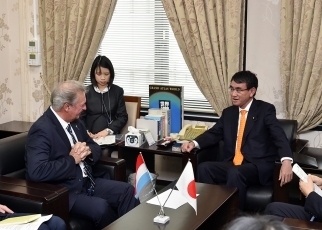 On November 27, commencing at around 12:20 p.m. for approximately 20 minutes, Mr. Taro Kono, Minister for Foreign Affairs, held a foreign ministers’ meeting with H.E. Mr. Jean Asselborn, Minister for Foreign and European Affairs of the Grand Duchy of Luxembourg, who was visiting Japan on the occasion of the state visit to Japan by His Royal Highness Grand Duke Henri of Luxembourg. The overview of the meeting is as follows.

2. The two ministers exchanged views on the situation in Europe, including the exit of the U.K. from the European Union (EU), and they also shared the view that they would cooperate toward the early signing and entry into force of the Japan-EU EPA.

3. With regard to the situation in North Korea, Minister Kono explained that now it is necessary for the international community as a whole to maximize pressure, and he intended to work closely with Luxembourg. In response, Minister Asselborn expressed complete solidarity with Japan. The two ministers shared the view that they would work closely, including by strengthening pressure on North Korea.