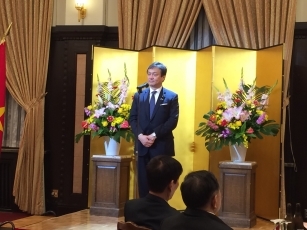 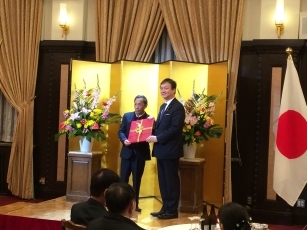 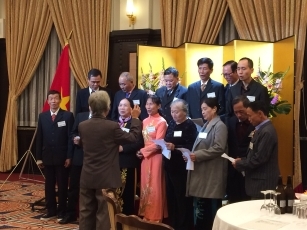 1. On October 19, Mr. Iwao Horii, Parliamentary Vice-Minister for Foreign Affairs, held a welcome dinner for the families of former Japanese soldiers in Viet Nam and joined Vietnamese War against France, who are visiting Japan upon invitation by a Japanese Foundation. The dinner was attended by the family members, officials from the Embassy of Viet Nam in Japan and others.

2. In his greeting, Parliamentary Vice-Minister Horii sincerely welcomed the families to Japan, and stated that along with his sense of gratitude for the families’ visit, he hopes the visit will be strongly etched in the two countries’ amicable history. Parliamentary Vice-Minister Horii explained that next year is the 45th anniversary of the establishment of diplomatic relations between Japan and Viet Nam, and he hopes this visit to Japan by the families will be an opportunity to deepen mutual understanding and friendship and goodwill between the two countries, and will contribute to further strengthening the bilateral relationship.

3. On behalf of the families, Mr. Phan Hong Chau explained in a greeting that words cannot describe the happiness he is feeling at this moment to be able to achieve his long-held dream of visiting his father’s native country for the very first time. Mr. Phan Hong Chau stated that had he been able to visit Japan sooner he may have the chance to meet with his father while he was still alive, but he is pleased to visit his father’s grave on the following day thanks to the support of those concerned, and he expressed gratitude to all those who supported this visit to Japan. Following that, the families performed a song.

4. In addition, Mr. Ryotaro Sugi, Japan-Viet Nam / Viet Nam-Japan Special Ambassador for Relationships (honorary chair of the Association for Supporting Visits to Japan by the Families of Former Japanese Soldiers in Viet Nam) gave a greeting in which he explained that, as a father with 153 adopted children at an orphanage in Viet Nam, he sympathizes deeply with the visiting families who yearn for their fathers, and as Japan-Viet Nam / Viet Nam-Japan Special Ambassador, he also shares same feeling with the visiting families as the person who has “two native countries”. Furthermore, he intends to make greater efforts for bilateral friendship and goodwill.

5. At the final stage of the dinner Ms. Miyuki Komatsu, Representative of the Association for Supporting Visits to Japan by the Families of Former Japanese Soldiers in Viet Nam, expressed gratitude to the individuals concerned who cooperated with realizing this visit to Japan, which was a long-held dream of the families in Viet Nam.

6. Throughout, this event was an opportunity for warm exchanges between the families visiting Japan from Viet Nam and the individuals concerned.