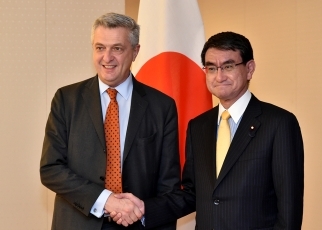 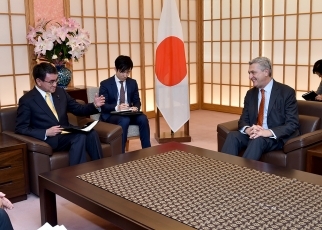 On November 17, commencing at 2:40 p.m. for approximately 20 minutes, Mr. Taro Kono, Minister for Foreign Affairs, received a courtesy call from Mr. Filippo Grandi, The United Nations High Commissioner for Refugees (UNHCR), during his visit to Japan. The overview of the courtesy call is as follows:

1. At the outset, Minister Kono welcomed High Commissioner Grandi’s visit to Japan. He noted that as the number of refugees and internally-displaced persons hit the highest since World War II, the role of the UNHCR had never been more important, and that Japan wished to further expand its cooperation with the UNHCR. In response, High Commissioner Grandi stated that the UNHCR also hoped to continue working toghether with Japan.

2. Minister Kono also stated that the Government of Japan would newly allocate 3.6 million US dollars of its initial budget to the UNHCR, to assist the activities of the UNHCR in Bangladesh. In response, High Commissioner Grandi expressed appreciation for Japan’s assistance.

[Reference 1] Mr. Filippo Grandi, the United Nations High Commissioner for Refugees (UNHCR)
High Commissioner Grandi has been serving in his current position since January 2016, after serving as head of the UNHCR’s Afghanistan office, Deputy Special Representative (responsible for political affairs) of the Secretary-General at the UN Assistance Mission in Afghanistan (UNAMA), and Commissioner-General of the UN Relief and Works Agency for Palestine Refugees in the Near East (UNRWA). He also used to serve as Special Assistant to former UNHCR, Ms. Sadako Ogata. This is his third visit to Japan as UNHCR.

The UNHCR is a United Nations organization that undertakes humanitarian assistance with the goal of protecting refugees and permanently resolving the refugee issue.
The UNHCR’s activities include granting international protection, providing lifestyle assistance and promoting voluntary repatriation, local settlement and resettlement for refugees and internally-displaced persons, and promoting the conclusion of treaties for protecting refugees and stateless persons.