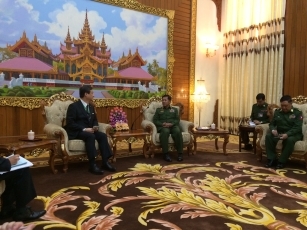 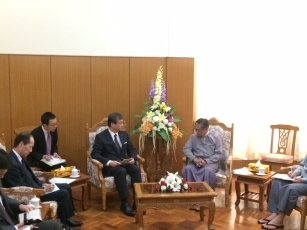 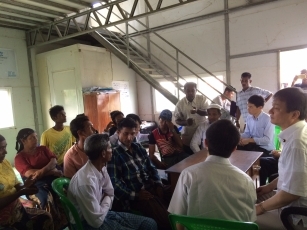 From September 21 to 23, Mr. Iwao Horii, Parliamentary Vice-Minister for Foreign Affairs visited Republic of the Union of Myanmar in order to exchange views with Myanmar Government officials regarding the situation in the northern part of Rakhine State.

(1) On September 21, Parliamentary Vice-Minister Iwao Horii had a series of meetings in Nay Pyi Taw with Commander-in chief of the Defence Services, Senior General Min Aung Hlaing, Mr. Kyaw Tint Swe, Union Minister for the Office of State Counsellor and Dr. Win Myat Aye, Union Minister for Social Welfare, Relief and Resettlement and Chairman of the Committee on Implementing Recommendations on Rakhine State.

(2) At the beginning, Parliamentary Vice-Minister Iwao Horii explained the positions of Japan not to change the current policy on Myanmar to fully support their nation building. He also stated Japan’s strong condemnation of the attacks against the Myanmar security forces and others since 25 August and expressed its concern over the human rights and humanitarian conditions on the ground, the reported allegations of killings of civilians, and the fact that approximately 400 thousand people were displaced. He also stressed the importance for the Myanmar government to restore security in a manner consistent with the rule of law and full respect for human rights, ensure early humanitarian access for people in all communities. He conveyed that the Japanese Government is planning an emergency assistance of up to 1 million US dollars, for those affected by the recent incidents. Furthermore, he stated that Japan will support Myanmar’s efforts to implement the recommendations for peace and stability by the Rakhine Advisory Commission.

(3) In response, after the expressions of appreciation for Japan’s supports, Myanmar side explained the positions of the Government of Myanmar; being committed to rooting democracy, paying respect for human rights, ensuring peace and stability and establishing rule of law; making at most efforts to distribute humanitarian assistance to all communities equally; has instructed security forces to act consistently with law and rules and restrain from exercising excessive force; implement the recommendations by the Rakhine Advisory Commission, identifying the actions by which it can obtain prompt effects and prioritize implementing them. During the meetings, it was also mentioned that the Government of Myanmar will work on the repatriation and resettlement of displaced people in accordance with the criteria already agreed with the Government of Bangladesh.