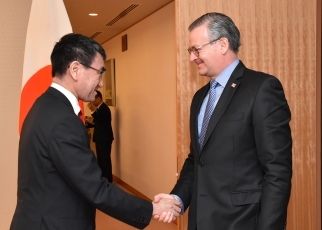 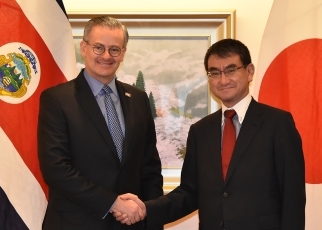 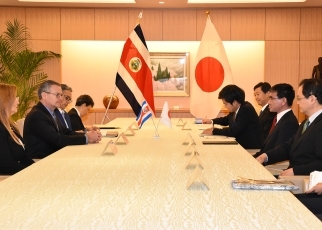 On September 8, commencing at 11:20 a.m. for approximately 40 minutes, Mr. Taro Kono, Minister for Foreign Affairs, held a meeting with H. E. Mr. Manuel Antonio Gonzalez Sanz, Minister of Foreign Relations and Worship of the Republic of Costa Rica, who is visiting Japan. The overview of the meeting is as follows.

1. At the beginning, Minister Kono welcomed Minister Gonzalez to Japan, noted that Japan and Costa Rica are both promoting fundamental values such as democracy and the rule of law, and explained that he hopes to achieve a close relationship between Japan and Central and South America through strengthening Japan’s relationship with Costa Rica.

2. Minister Kono also stated that based on the experiences of Hiroshima and Nagasaki, Japan is striving to realize a world without nuclear weapons amid tangible threats such as North Korea’s nuclear test and ballistic missile launches. Minister Kono explained that North Korea went ahead with its sixth nuclear test, but this represents a challenge to the international community and pressure needs to be exerted by the international community as a whole.

3. Minister Gonzalez replied that he can fully understand the threat North Korea poses to the East Asia region, and this is a threat not only to the region but to the entire world. Minister Gonzalez stated that Costa Rica is also aiming to realize a world without nuclear weapons, and from the standpoint of Costa Rica’s emphasis on disarmament also, North Korea’s series of provocative acts and nuclear tests are unacceptable and should be condemned.

4. Minister Kono explained the regional situation, including China, and Japan’s position concerning the need for United Nations Security Council (UNSC) reform, and he requested Costa Rica’s understanding. Minister Gonzalez stated that on the basis of Costa Rica’s 80 or more years of amicable relations with Japan he understands Japan’s position, along with expressing deep gratitude for Japan’s cooperation for Costa Rica in the environmental and other fields, and stating that he hopes to cooperate with Japan on various challenges in the international arena also.