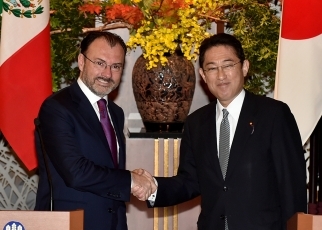 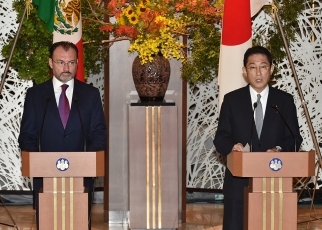 On July 31, commencing at 12:00 p.m. for approximately one hour and 20 minutes, Mr. Fumio Kishida, Minister for Foreign Affairs, held a luncheon meeting with H.E. Dr. Luis Videgaray Caso, Secretary of Foreign Affairs of the United Mexican States, who is making a working visit to Japan as a distinguished guest of the Ministry of Foreign Affairs.
The overview of the meeting is as follows.

1. At the beginning, Minister Kishida welcomed Secretary Videgaray to Japan and expressed a great pleasure at being able to welcome the Secretary of Foreign Affairs of Mexico as a distinguished guest of the Ministry for the first time in three years. With regard to bilateral relations, Minister Kishida expressed gratitude for Secretary Videgaray’s declaration that Japanese companies will be taken into account when the North American Free Trade Agreement (NAFTA) is renegotiated. He also mentioned the auspicious commencement of this year which marks the 120th anniversary of Japanese immigration to Mexico and next year as the 130th anniversary of the establishment of diplomatic relations, as well as stated that he hopes to take advantage of these opportunities to further enliven the active relationship between the two countries. Minister Kishida noted that more than 10 years have passed from the entry into force of the Japan-Mexico Economic Partnership Agreement (EPA), which has contributed to expanding rapidly the economic relations and helping more Japanese companies set up businesses in Mexico than anywhere in Central and South America region. Minister Kishida stated that, as the members of the Trans-Pacific Partnership (TPP), the two countries should cooperate to bring the TPP into force promptly.

With regard to North Korea, Minister Kishida explained that the ballistic missile launch by North Korea on July 28 constitutes a threat to the security of the region and the international community, including Japan, appreciated Mexico’s statement condemning the launch and expressing solidarity with Japan, and stated that he hopes to work closely with Mexico.

Additionally, with regard to disarmament and nonproliferation, Minister Kishida stated that a strong will to realize a world without nuclear weapons is shared between both countries.

2. In response, Secretary Videgaray stated that he feels honored to have this opportunity to visit Japan and expressed gratitude for the invitation. He welcomed the friendship between the two countries, which has lasted for more than 400 years and marks next year as the 130th anniversary of the establishment of diplomatic relations. Secretary Videgaray stated that Mexico constantly maintains a relationship of mutual trust with Japan at governmental level, as trade partners and even in the tourism area, which makes Japan Mexico’s primary partner in Asia. Secretary Videgaray also noted that, as promors of free trade, the two countries’ trade has doubled over the 12 years since the Japan-Mexico EPA entered into force. Secretary Videgaray congratulated Japan for its leadership of the recent high-level consultation on the TPP, and explained that the interests of Japanese companies, which have invested in Mexico for many years, will continue to be taken into consideration in connection with the NAFTA renegotiations.

Furthermore, Secretary Videgaray expressed his concern about the recent ballistic missile launches by North Korea, and explained that as a peace-loving country with a diplomatic tradition of disarmament, Mexico firmly condemns the recent missile launches, and in particular, condemns the danger that they pose to Mexico’s best ally in Asia, Japan.

With regard to disarmament and nonproliferation, Secretary Videgaray stated that he is proud of the Treaty of Tlatelolco, which made Central and South America region a nuclear-free zone, as an outcome of Mexico’s diplomacy.