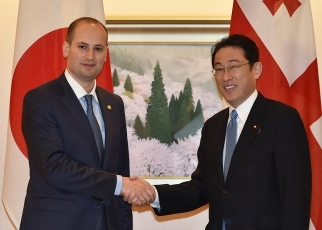 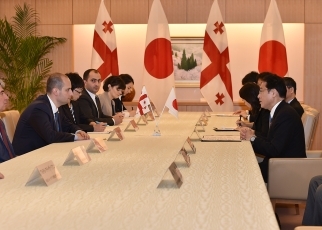 On June 2, commencing at around 10:25 a.m. for approximately 35 minutes, Mr. Fumio Kishida, Minister for Foreign Affairs, held a foreign ministers’ meeting with H.E. Mr. Mikheil Janelidze, Minister of Foreign Affairs of Georgia, who is visiting Japan. The overview of the meeting is as follows.

1. Minister Kishida expressed his pleasure at welcoming Minister Janelidze to Japan on the occasion of the 25th anniversary of the establishment of diplomatic relations between Japan and Georgia. He stated that Japan attaches importance to relations with Georgia, which shares universal values such as democracy, freedom, human rights and the rule of law.

2. Minister Janelidze expressed his gratitude for Japan’s political, financial and technical support in Georgia, and he expressed his wish to elevate bilateral relations to a new level. In addition, he welcomed the establishment of the Japan International Cooperation Agency Georgia Office.

4. With regard to North Korea, both ministers shared the view on the need for the international community to act as one and apply pressure. In addition, Minster Janelidze stated that Georgia fully supports Japan regarding the abductions issue. The two ministers also exchanged views on issues related to the South Ossetia and Abkhazia.