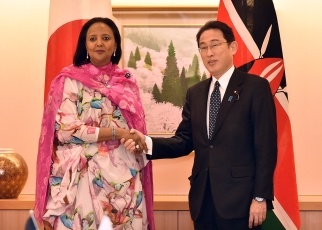 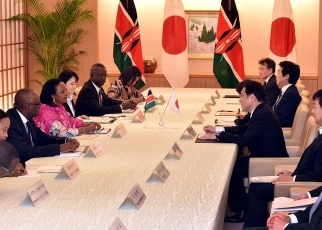 On May 8, commencing at around 3:20 p.m. for approximately 55 minutes, Mr. Fumio Kishida, Minister for Foreign Affairs, held a foreign ministers’ meeting with Ambassador Amina C. Mohamed, Cabinet Secretary for Foreign Affairs, Republic of Kenya, who is visiting Japan to attend the 2017 Spring Conferment of Decorations on Foreign Nationals (PDF)

. The overview of the meeting is as follows.

1. Minister Kishida congratulated Cabinet Secretary Mohamed on being awarded the Grand Cordon of the Order of the Rising Sun. Minister Kishida stated that the historical success of last year’s Sixth Tokyo International Conference on African Development (TICAD VI) was very much owing to Cabinet Secretary Mohamed’s distinguished leadership, and once again expressed his gratitude. Minister Kishida also conveyed that Japan would like to work with Kenya to maintain and strengthen a free and open maritime order in the Indo-Pacific region, and that he hopes to cooperate on developing the Mombasa Special Economic Zone and bringing a bilateral investment agreement into force promptly.

2. In response, Cabinet Secretary Mohamed expressed her gratitude for being awarded the Grand Cordon of the Order of the Rising Sun, which she said she would humbly accept on behalf of the Kenyan people, explained that Kenya is proud that the TICAD VI and the state visit to Kenya by Mr. Shinzo Abe, Prime Minister of Japan, took place successfully, and stated that she hopes to follow up on those outcomes in the future. She also expressed gratitude for the support Japan has extended to Kenya thus far, including the development of Mombasa’s port and Special Economic Zone.

3. In addition, the two foreign ministers shared recognition of the importance of national dialogue in South Sudan and of ceasing hostilities there. They also exchanged views on regional affairs, including North Korea and Somalia, and cooperation in the international arena, including United Nations Security Council (UNSC) reform.