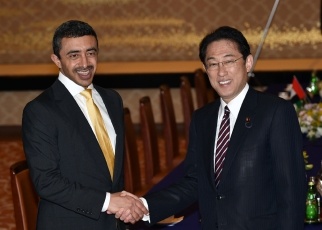 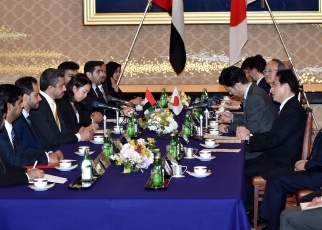 On April 24, Mr. Fumio Kishida, Minister for Foreign Affairs, held a Foreign Ministers’ Meeting and working dinner with H.H. Sheikh Abdullah bin Zayed Al Nahyan, Minister of Foreign Affairs and International Cooperation of the United Arab Emirates (UAE), at the Iikura Guest House from 17:30 for roughly one hour and forty-five minutes. The overview is as follows.

4. Minister Kishida informed Minister Abdullah that Japan has decided to participate in Dubai Expo 2020 and also requested him for his support for Osaka’s candidature to Expo 2025. At the same time, Minister Kishida requested his support to renew the share of offshore concession right that Japanese companies currently have after the end of the term in 2018, as this is an opportunity to further expand the cooperation between the two countries. Regarding the offshore concession, Minister Abdullah responded that he would like to make his efforts taking the importance of the relation with Japan into consideration.

5. The two ministers discussed views on the situations in East Asia and the Middle East over dinner. Minister Abdullah supported Japan’s stance against actions taken by North Korea and on the other hand he showed his concern over actions of Iran. Regarding situation in Syria, Minister Kishida stated that it is important to promote the political process progress through realizing the early cease-fire and improving humanitarian access and he would like to cooperate with the UAE in this regard as well.