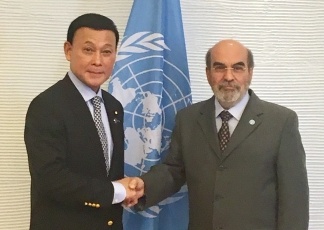 On April 11, (same day at local time), Mr. Motome Takisawa, Parliamentary Vice-Minister for Foreign Affairs, during his visit to Rome, Italy, to attend the G7 Energy Ministers’ Meeting, had a meeting with Mr. José Graziano da Silva, Director-General of FAO. The summary of the meeting is as follows:

3. In light of the increasing momentum between Japan and FAO to deepen their cooperation, which has manifested in the first holding of the Japan-FAO Annual Strategic Consultation in January, Parliamentary Vice-Minister Takisawa and Director-General Graziano da Silva reaffirmed the two parties’ continued cooperation towards further strengthening Japan-FAO partnership.