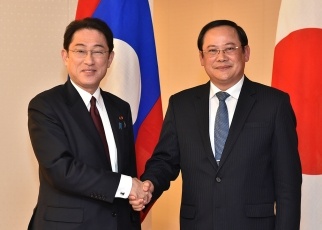 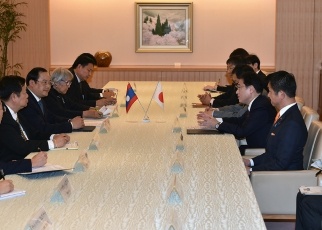 1. On March 6, commencing at 4:10 p.m. for 25 minutes, Mr. Fumio Kishida, Minister for Foreign Affairs, held a meeting with H.E. Mr. Sonexay Siphandone, Deputy Prime Minister of the Lao People’s Democratic Republic (Lao PDR), who is visiting Japan by the invitation from Ministry of Foreign Affairs. The overview of the meeting is as follows.

2. At the beginning, Minister Kishida welcomed Deputy Prime Minister Sonexayto Japan, and appreciated that the Lao PDR guided the Association of Southeast Asian Nations (ASEAN)-related meetings to success last year as the ASEAN Chair. Deputy Prime Minister Sonexay expressed gratitude for this invitation to Japan, and stated that he feels overjoyed that exchanges between Japan and the Lao PDR are prospering at various levels.

3. Following that, Deputy Prime Minister Sonexay expressed his gratitude for Japan’s attendance at last year’s ASEAN-related meetings and the various support that Japan extended at that time. In addition, Deputy Prime Minister Sonexay explained that following the entry into force of the Air Services Agreement in May last year, he hopes to make progress with the realization of direct flights. Minister Kishida explained that Japan will contribute in various fields in order to realize the Japan-Lao PDR Joint Development Cooperation Plan. Minister Kishida expressed expectation that the Lao PDR’s will improve its investment environment so that Japanese companies can set up further businesses there, and that direct flights will commence.

4. In addition, Minister Kishida stated that he also intends to coordinate closely on issues such as the situation in South China Sea near future.