Foreign Minister Fumio Kishida Receives a Courtesy Call from a Delegation of the U.S. Congressional Study Group on Japan 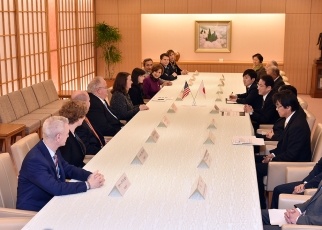 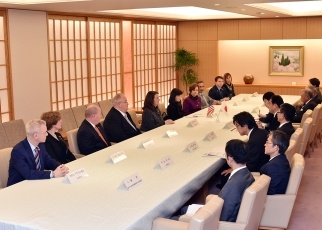 On February 22, commencing at 3:30 p.m. for approximately 20 minutes, Mr. Fumio Kishida, Minister for Foreign Affairs, received a courtesy call from a delegation of the United States Congressional Study Group on Japan (CSGJ). The overview is as follows.

2. In response, Representative Diana DeGette, United States Congresswoman, expressed her happiness in meeting Minister Kishida again, and explained that she feels overjoyed to be able to visit Japan with Congress members who are committed to work on strengthening the relationship between the two countries. Representative DeGette stated that the recent visit by Mr. Shinzo Abe, Prime Minister of Japan, to the United States was a huge success, and noted that over the last few years there has been a succession of important developments in the Japan-U.S. relationship, such as Prime Minister Abe’s visit to the United States the year before last, when he addressed a joint meeting of Congress.

3. In addition, the members of the delegation each gave a self-introduction, and an exchange of views took place on regional affairs, Japan-U.S. exchanges and other topics.

(Reference) Members of the U.S. Congress who took part in the courtesy call