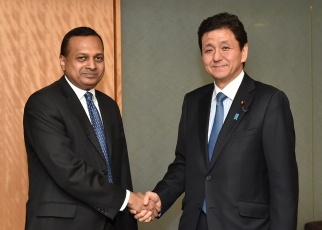 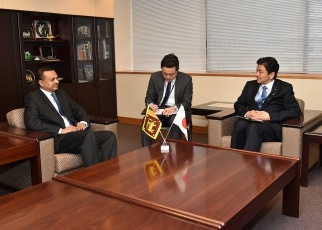 On December 21, commencing at 3:30 p.m. for approximately 20 minutes, Mr. Nobuo Kishi, State Minister for Foreign Affairs, held an exchange of views with the Hon. Niroshan Perera, State Minister of National Policies and Economic Affairs of the Democratic Socialist Republic of Sri Lanka, who is visiting Japan. The overview of the meeting is as follows.

1. State Minister Kishi stated that Japan consistently places importance on its relationship with Sri Lanka, which is located in a strategic position in the Indian Ocean. State Minister Kishi also expressed his hope to instigate further concrete advances in the long-standing friendly relationship between Japan and Sri Lanka, particularly in the sense that there is vast capacity for Japanese companies to cooperate in expanding trade and investment between the two countries and in contributing to Sri Lanka’s economic development and employment growth, and that he expressed his intention to cooperate on infrastructural development and improvement of the investment environment.

2. In response, State Minister Perera expressed gratitude for the support from Japan thus far, and stated that the Government of Sri Lanka was focusing on strengthening relations with Japan, particularly in infrastructural development including ports and electricity, business promotion, and trade expansion. State Minister Perera expressed his expectation for further cooperation from Japan, as possessing high technology, and stated that it would be important to further strengthen the long-stand friendly relationship between the two countries involving the younger generation.

(Reference)
State Minister Perera is visiting Japan on a strategic working visit upon invitation from the Ministry of Foreign Affairs from December 15 to 22 and holding exchanges of views with government and private-sector representatives in economic areas. State Minister Perera also visited Japan in August 2016. This is the first meeting between the two State Ministers.