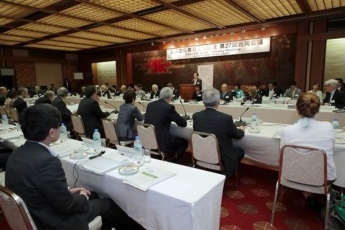 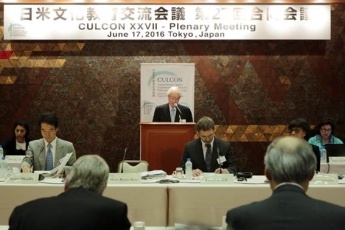 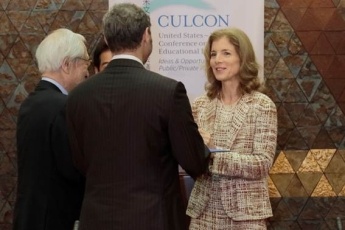 1. On June 17, the 27th Plenary Session of the United States-Japan Conference on Cultural and Educational Interchange (CULCON) convened in Tokyo.

2. The plenary session was co-chaired by Mr. Ryozo Kato, Japan CULCON Chair (Former Ambassador of Japan to the United States) and Mr. Harry A. Hill, U.S. CULCON Chair (CEO and President, Oak Lawn Marketing. Inc.), and was participated in by the panelists representing government and various sectors such as business and academia, as well as H.E. Ms. Caroline Kennedy, U.S. Ambassador to Japan (see the attached list of the panelists of CULCON).

3. At the beginning, the conference received messages from Prime Minister Abe and President Obama, as well as from Mr. Hase, Minister of Education, Culture, Sports, Science and Technology on the outcomes of G7 Education Minister’s Meeting. In addition, taking into account the prestigious leadership of H.E. Ms. Caroline Kennedy, U.S. Ambassador to Japan, who is continuously committed to strengthening Japan-U.S. relations, the title “Honorary Member” of CULCON was presented to her by the both Chairs.

4. This conference discussed challenges to be tackled and counter-measures against them mainly on the following four subjects; educational exchange, Japanese language education in the U.S., art exchange and intellectual and people-to-people exchanges. The outcome of the discussions was released as a Joint Statement. Its outline is as follows (see the attached Joint Statement (English (PDF)

(1) As circumstances surrounding CULCON and Japan-U.S. relationship have changed drastically, the bilateral relationship today confronts an even more diverse set of challenges than ever. Against this backdrop, the next generation of leaders urgently needs to be fostered for the future of Japan-U.S. relations, while the generations who have so far contributed to build the robust relationship are to retire. CULCON convened with such broad issues in the background. Recommendations are as follows.

(2) Further promote study abroad opportunities for short-term periods which are on an upward trend as well as those for an academic degree, with a view to achieving the goal of "doubling two-way student exchange by 2020", mentioned in the Annex of the Joint Statement issued at the Japan-U.S. summit meeting in 2014.

(3) Strengthen initiatives to support Japanese-language education in the U.S., such as through programs to study in Japan, support for Japanese-language courses with a difficulty to continue, and approaches to regional communities, etc.

(4) Expand programs including those for educational and curatorial exchange to foster young experts on Japanese arts.

(5) Establish a Task Force on intellectual and people-to-people exchanges, which focuses on fostering the next generation leaders for U.S.-Japan relations.

5. Prior to the conference, on Thursday, June 16, Mr. Shinsuke Sugiyama, Vice-Minister for Foreign Affairs hosted a reception at Iikura House to welcome the CULCON participants.

(Note)
CULCON was established in June 1961 by a joint statement announced by Prime Minister Ikeda and President Kennedy. Its first meeting was held in Tokyo in January 1962. Ever since then, conferences have been held biannually, alternating between Japan and the U.S..