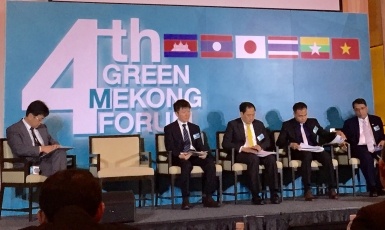 1. The Government of Japan and the Royal Thai Government co-hosted the 4th Green Mekong Forum in Bangkok, the Kingdom of Thailand, on June 13. The Forum was co-chaired by Mr. Takeshi Osuga, Deputy Director-General, Southeast and Southwest Asian Affairs Department, Ministry of Foreign Affairs of Japan, and H.E. Mr. Kallayana Vipattipumiprates, Ambassador attached to the Ministry, Ministry of Foreign Affairs of Thailand.

2. Participants from Japan and the Mekong countries (the Kingdom of Cambodia, the Lao People’s Democratic Republic, the Republic of the Union of Myanmar, the Kingdom of Thailand, and the Socialist Republic of Viet Nam), the Japan International Cooperation Agency (JICA), a local government (Fukuoka Prefecture), the Neighboring Countries Economic Development Cooperation Agency (NEDA), the Mekong River Commission, and the Chaipattana Foundation exchanged views and experiences on “Quality Infrastructure” and “Water Resource Management”. Representatives from United States of America, Australia, and Republic of Korea also attended this forum.

3. The attendees and the agencies shared the determination to strengthen the Mekong-Japan Cooperation under the Action Plan for ‘A Decade towards the realization of Green Mekong’ Initiative, with an emphasis on environmental sustainability and economic growth, in order to tackle the issues to be related to environment and climate change, and strengthen the connectivity within the Mekong region.

4. The outcome of this Forum will be reported to the 9th Mekong-Japan Foreign Ministers’ Meeting in July 2016.