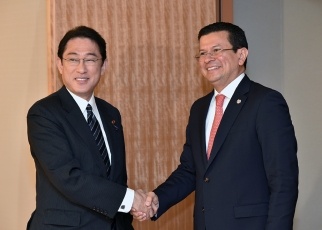 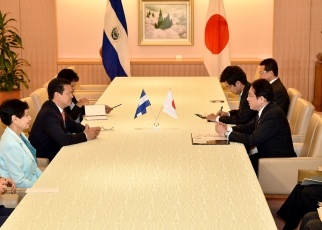 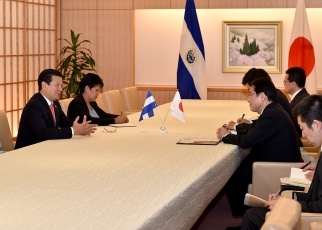 (1) Minister Kishida expressed gratitude to Minister Martínez for his cooperation on the friendship visit by Her Imperial Highness Princess Mako of Akishino last year to El Salvador as her first official visit to celebrate "Japan-SICA Friendship Year" on the occasion of the 80th anniversary of the establishment of diplomatic relations.

(2) Minister Martínez voiced appreciation for Japan’s role in cooperation between the two countries, including in areas of climate change and disaster prevention. He stated that Japan and El Salvador have an alliance relationship and that El Salvador continues to support Japan contributing to global peace.

(3) The two ministers agreed to continue their cooperation in the international arena, which include disarmament and non-proliferation, Security Council reforms and human rights.

(2) Minister Martínez appreciated the Japan Overseas Cooperation Volunteers active in El Salvador and expressed expectations for promotion of exchanges involving young people and science and culture that contribute to integration. In response, Minister Kishida explained that Japan has invited 100 people from Latin America, including 34 people from SICA countries, to visit Japan this year as part of people exchanges and intends to expand this invitation program.