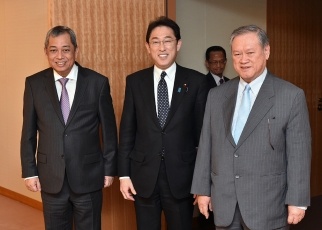 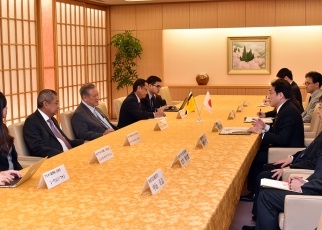 On January 28, commencing at 5:25 p.m. for approximately 30 minutes, Mr. Fumio Kishida, Minister for Foreign Affairs of Japan, held a meeting with Pehin Orang Kaya Pekerma Dewa Dato Seri Paduka Lim Jock Seng, Minister at Prime Minister’s Office and Second Minister of Foreign Affairs and Trade of Brunei Darussalam. The overview of the meeting is as follows.

1. At the beginning, Minister Kishida expressed his gratitude for many years of stable supply of liquefied natural gas (LNG) from Brunei, and explained that he hopes to cooperate closely to develop the bilateral relationship and the Japan-ASEAN relationship. In response, Minister Lim stated that Brunei attaches importance to industrial diversification and he intends to consider what sorts of cooperation could be pursued with Japan, whereupon Minister Kishida explained that Japan hopes to cooperate based on a serious examination of what kinds of cooperation are possible, including in the information and communications technology (ICT) field, which Brunei is emphasizing.

2. In addition, the two ministers shared the view that they wouldpromote people-to-people exchanges, and Minister Lim expressed his support for Japan's permanent membership on the United Nations Security Council. Minister Kishida expressed his appreciation and asked for Brunei’s continuous understanding and support. Furthermore, Minister Kishida asked that restrictive measures by Brunei imposed on import from Japan following the Great East Japan Earthquake be promptly abolished.

3. Additionally, Minister Kishida explained that he attaches importance to Japan’s relationship with Brunei, which is the coordinating country for ASEAN-Japan relations, and he emphasized the importance of supporting the ASEAN Community, strengthening the East Asia Summit (EAS) and responding to regional challenges toward the ASEAN-related foreign ministers’ meetings in July.

4. The two ministers also exchanged views on the South China Sea issue, and shared the view that they would continue to coordinate closely in the future also.