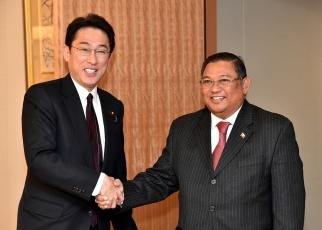 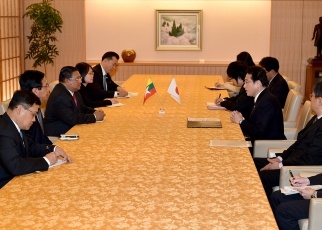 1. The overview of the points made by Minister Kishida is as follows..

(2) The Foreign Minister welcomed the opening of the Thilawa Special Economic Zone this past September and expressed his hope that the Myanmar government will continue to offer its support as investments from Japan increase as anticipated.

(3) The Foreign Minister stated that as Myanmar approaches the establishment of its next administration, he is aware that consultations involving the relevant officials are currently ongoing and he hopes that the transfer of power proceeds smoothly. The Foreign Minister expressed his wish that the current regime makes necessary arrangement with the new administration to make sure the smooth implementation of Japan’s aid projects in the Thilawa Special Economic Zone, the Dawei Special Economic Zone and elsewhere.

2. In response, Minister Wunna Maung Lwin made the following remarks. "I appreciate you creating the opportunity for this meeting today. I would like to deliver a message from President Thein Sein to wish Prime Minister Abe and his wife well. Foreign Minister Kishida has visited Myanmar twice and we have had other opportunities to meet as well, so I am certain that bilateral relations are improving further. In addition, I believe that the many wonderful ceremonies held in our two countries in this 60th year since the establishment of diplomatic relations will also contribute to improving ties. I express my gratitude for the assistance Japan has provided for the sake of various reforms. As we are currently preparing to hold consultations ahead of the establishment of the next administration, those consultations will also cover projects in the Thilawa and Dawei special economic zones. I highly applaud the attendance at the opening ceremony for the Thilawa Special Economic Zone by Deputy Prime Minister, Minister of Finance and Minister of State for Special Missions Taro Aso. I, too, would like Japan to continue cooperating with us in the Dawei Special Economic Zone. I believe these projects will benefit not only Myanmar but the region as well."

3. Additionally, the foreign ministers exchanged views on regional affairs and other matters of bilateral common interest.