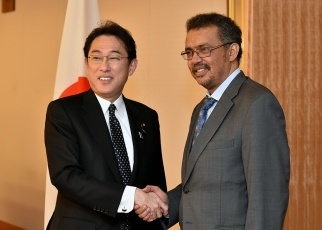 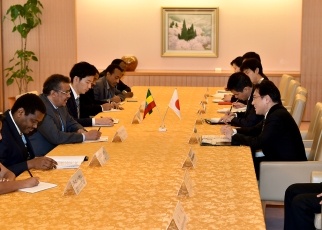 On December 18, commencing at around 10:15 a.m. for approximately 35 minutes, Mr. Fumio Kishida, Minister for Foreign Affairs of Japan, held a meeting with H.E. Dr. Tedros Adhanom, Minister of Foreign Affairs of the Federal Democratic Republic of Ethiopia, who is visiting Japan to attend the International Conference on Universal Health Coverage (UHC) in the New Development Era and the 5th Replenishment Preparatory Meeting of the Global Fund to Fight AIDS, Tuberculosis and Malaria. The overview of the meeting is as follows.

(1) Minister Kishida expressed gratitude for Minister Tedros’ visit to Japan to participate in the conferences and congratulated Minister Tedros for his reappointment as Minister of Foreign Affairs in the new cabinet of Ethiopia inaugurated in October this year. Furthermore, Minister Kishida expressed his sympathy for the serious drought damage occurring in Ethiopia and Japan’s intention to provide support, and stated that he intended to further develop the relationship between the two countries as they work toward the TICAD planned for next year, the first TICAD to be held in Africa.

(2) Minister Tedros expressed gratitude for the contribution of Japan, a country known as a founding father of the Global Fund, and stated his expectations regarding the initiatives of Japan to promote UHC as it assumes the Presidency of the G7 Summit next year.

(1) Minister Kishida stated that he hoped TICAD VI will be a conference that strengthens human resources development and quality infrastructure investment for which there is a high demand in Africa, and gives a boost to the Agenda 2063 that Africa is implementing.

(2) Minister Tedros stated that he was looking forward to TICAD VI and that he intended to cooperate to make it a success.

(1) Minister Kishida welcomed the fact that the signing ceremony for the agreement to establish a Japan External Trade Organization (JETRO) office in Addis Ababa would be held on December 18, and requested cooperation in developing the investment environment. Furthermore, the Minister stated that Japan intends to cooperate for the economic transformation aimed at the industrialization of Ethiopia.

(2) Minister Tedros noted that he was aware of the high level of interest Japanese companies have in investment in Ethiopia and that the signing of the agreement to open the JETRO office was historical, and stated that he expected that it would boost the entry of the private sector of Japan into Ethiopia and trade and investment between the two countries.