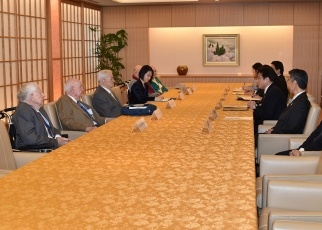 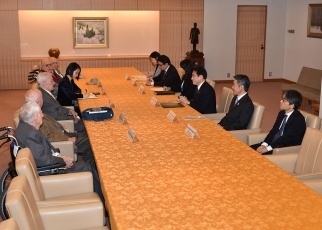 On December 9 at 9:30 a.m., five former U.S. prisoners of war (POWs), invited to Japan by the Ministry of Foreign Affairs, paid a courtesy call on Mr. Fumio Kishida, Minister for Foreign Affairs of Japan for approximately 20 minutes. The outline of the meeting is as follows.

1. Minister Kishida welcomed the group and stated that it would be great if this visit serves to further promote reconciliation of minds toward Japan.

2. In response, Mr. Charles Brown, on behalf of the group, said that this invitation program which started in 2010 has brought positive results in promoting international understanding and mutual reconciliation between Japan and the United States. Mr. Brown mentioned that Japan is the most important ally for the U.S. in the Pacific and expressed his hope that the U.S.-Japan Alliance would become even stronger. He also expressed his gratitude for the opportunity to visit Japan with this program.

3. In addition, Minister Kishida noted that the U.S.-Japan Alliance forms the foundation for peace and stability in the Asia-Pacific region and that he hopes to strengthen the alliance in a wide range of fields in the future. The courtesy call was held in a friendly atmosphere.