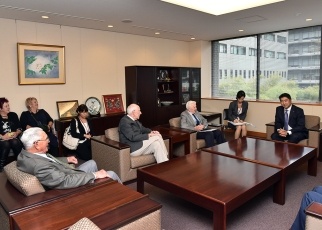 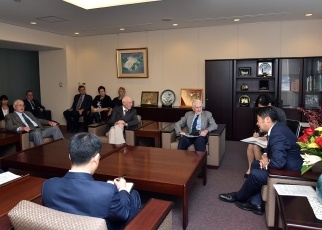 On November 10, commencing at 1:00 p.m. for approximately 15 minutes, a total of seven people, consisting of three former Australian prisoners of war (POWs) and four members of their families, who are visiting Japan at the invitation of the Ministry of Foreign Affairs, paid a courtesy call on Mr. Seiji Kihara, State Minister for Foreign Affairs. The overview is as follows.

2. In response, the three former POWs expressed their gratitude for the invitation from the Government of Japan at this time, 70 years after the end of World War II, and explained they are overjoyed to be able to visit Japan, along with stating that they hope the friendly relationship between Japan and Australia will be strengthened further and will look toward the future, not the past.

3. Additionally, State Minister Kihara expressed his intention to learn attentively from the generation of the former POWs and to build the future of the two countries through young generations, and he also said that he by all means hopes they take this occasion to enjoy their stay in Japan. The meeting took place in a congenial atmosphere.