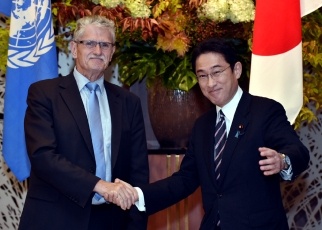 On September 7, commencing at 6:30 p.m. for approximately one hour, Minister for Foreign Affairs Fumio Kishida held a working dinner with H.E. Mr. Mogens Lykketoft, President-elect of the 70th session of the United Nations General Assembly, who was visiting Japan upon invitation by the Ministry of Foreign Affairs. An overview of the working dinner is as follows:

1. At the outset, Minister Kishida congratulated Mr. Lykketoft on his election as President of the UN General Assembly in this milestone year of the 70th anniversary of the founding of the United Nations, and stated that he would proactively cooperate with Mr. Lykketoft, as many important issues remain unsolved in the fields of UN Security Council reform, development, and non-proliferation and disarmament. In response to this, President Lykketoft stated that he was pleased to visit Japan, and he emphasized the importance of his visit to Hiroshima on the occasion of the 70th year since the atomic bombing and said that he would cooperate with Japan in various fields such as development and climate change.

2. Moreover, Minister Kishida stated that, as a peace-loving nation, Japan had been working in the fields of development, peacebuilding, and non-proliferation and disarmament for the peace, stability and prosperity of the international community during the past 70 years since the end of World War II, and would continue to proactively contribute to solving global issues in the future as well. Minister Kishida also pointed out the importance of realizing UN Security Council reform. In response to the above, President Lykketoft welcomed Japan’s contribution, and stated that regarding the UN Security Council reform, he would undertake the results of the discussion in the previous UN General Assembly and promote further discussion in the next General Assembly.

3. Both parties confirmed that they shared recognition of the importance of efforts in the fields of the “2030 Agenda for Sustainable Development”, UN Security Council reform, non-proliferation and disarmament, climate change, and active participation of women, and would continue their cooperation in the future as well.