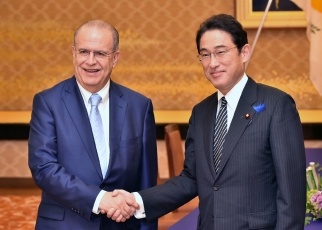 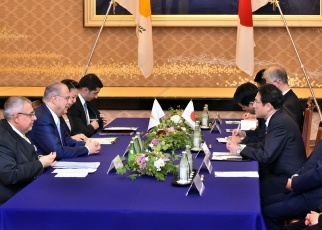 Minister Kishida welcomed the visit to Japan by Minister Kasoulides and also stated that he would like to closely cooperate on global issues as partners that share basic values. In response to this, Minister Kasoulides expressed his gratitude for the invitation from the Government of Japan.

Minister Kishida stated that the promotion of people-to-people exchanges in the fields of tourism and education/academism will lead to an enhancement of friendly relations. Minister Kasoulides conveyed his approval of this and stated that Cyprus places its emphasis on the relationship with Japan among Asian countries, and that he would like to promote further dialogues between the two countries.

Minister Kishida was given an explanation on the Cyprus issue by Minister Kasoulides, and also welcomed the progress of recent north-south negotiations, thus stated that the reunification of both Greek and Turkish Cypriot communities will bring stability and prosperity to the region and he expressed his expectation towards an early settlement of the issue.

Moreover, Minister Kasoulides touched on a fact that he promoted the opening of the negotiation of Japan-EU economic partnership agreement (EPA) when Minister Kasoulides was a member of the European Parliament. The two ministers shared a view to aiming for an agreement in principle on the Japan-EU EPA by the end of this year.

3. Regional situation and cooperation in the international arena

The two ministers confirmed that they will cooperate with each other on common issues in the international arena such as security and the fight against terrorism. Moreover, regarding Ukraine, they shared the view that it is important to emphasize the sovereignty and territorial integrity of Ukraine while continuing dialogues with Russia. In addition, they shared the view on the necessity of United Nations reform.

Furthermore, Minister Kasoulides stated that Cyprus emphasizes the role of Japan in the global security and expressed his complete support of the “Peace and Security Legislation” which is currently under discussion in the Diet. Then, the two ministers exchanged views on the situation in Asia and current situation of Greece. In the exchanges, Minister Kasoulides denounced North Korea, stating that the abduction is the worst expression of terrorism and expressed his support for the stance of the Government of Japan.