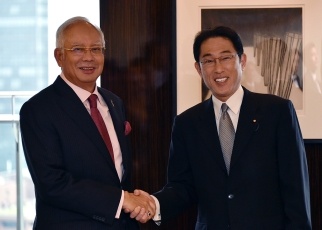 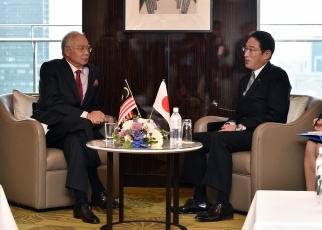 On May 25, commencing at around 4:00 p.m. for approximately 20 minutes, Mr. Fumio Kishida, Minister for Foreign Affairs, paid a courtesy call on the Honourable Dato' Sri Mohd Najib bin Tun Abdul Razak, Prime Minister of Malaysia, who is on an official working visit to Japan. The overview is as follows.

(1) Minister Kishida welcomed Prime Minister Najib to Japan, and welcomed that cooperation between the two countries is steadily deepening the foundation of the Look East Policy (LEP) and closer economic relations. In addition, based on Minister Kishida expressed respect for Prime Minister Najib serving as the Association of Southeast Asian Nations (ASEAN) chair in the milestone year of the establishment of the ASEAN Economic Community (AEC). Minister Kishida stated that he intends to cooperate with H.E. Dato' Sri Anifah bin Aman, Minister of Foreign Affairs of Malaysia, toward the success of the ASEAN Foreign Ministers’ Meeting this summer. In response, Prime Minister Najib welcomed the deepening relationship between the two countries , including through the implementation of the Look East Policy 2.0 (LEP 2.0).

2. Challenges in the regional and international community

(2) Minister Kishida expressed his intention to deepen coordination with Malaysia in the field of peace-building, and explained that the High-Level Seminar on Peacebuilding, National Reconciliation and Democratization in Asia will be held in Tokyo in June this year.

(3) Minister Kishida expressed concerns about the current situation in the South China Sea,and conveyed his support for ASEAN’s efforts. In addition, Minister Kishida explained that Japan is prepared to contribute to the Rohingya boat people issue and Prime Minister Najibstated that Malaysia welcomes support from the international community, including Japan.