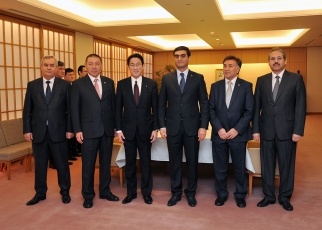 On February 4, commencing at 10:00 a.m. for approximately 30 minutes, Mr. Fumio Kishida, Minister for Foreign Affairs, received a courtesy call by the vice ministers of foreign affairs of five Central Asian countries, who visited Japan to participate in the ninth Senior Officials’ Meeting (SOM) of the “Central Asia plus Japan” Dialogue. The overview is as follows.

1. Minister Kishida mentioned the fifth Foreign Ministers’ Meeting of the “Central Asia plus Japan” Dialogue held in the Kyrgyz Republic in July last year, and said he wants to have this framework become a stage for practical cooperation. Additionally, in connection with the terrorist incident regarding the murder of Japanese hostages in Syria, Minister Kishida said he also wants to cooperate on peace and prosperity in Central Asia from the viewpoint of combating terrorism also. He also stated that Central Asian countries are important partners in the field of nuclear disarmament and nonproliferation, and he wants to deepen cooperation toward the success of this year’sReview Conference of the Treaty on the Non-Proliferation of Nuclear Weapons (NPT).