On Wednesday, July 16, Mr. Fumio Kishida, Minister for Foreign Affairs, visited the Kyrgyz Republic to attend Fifth Foreign Ministers’ Meeting of the “Central Asia plus Japan” Dialogue and to hold bilateral meetings with countries of Central Asia. An overview of his visit is as follows: 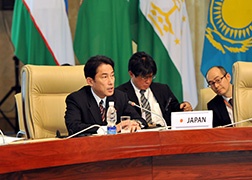 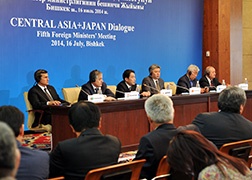 The Fifth Foreign Ministers’ Meeting held on the tenth anniversary since the start of the “Central Asia plus Japan” Dialogue in 2004 was attended by foreign ministers from all the member countries for the first time ever. In the past 10 years, Japan joined the dialogue for regional cooperation in specific fields based on the idea that regional cooperation is necessary for stability and development of Central Asia. In this meeting, on the basis of this concept, the participants confirmed direction of the “Central Asia plus Japan” dialogue as a vision for “the next 10 years” that it will serve as a field for enhancing practical cooperation.
As a result of the foreign ministers’ meeting, the participants summarized 10 years of the “Central Asia plus Japan” dialogue, and signed the “Joint Statement” which includes a wide range of contents such as progress in regional cooperation in specific fields, importance of peaceful solution of conflict and cooperation in an international arena such as disarmament and non-proliferation. The participants also adopted the “Roadmap” which indicated directions of cooperation and specific examples in the field of agriculture. 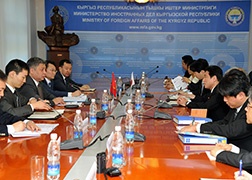 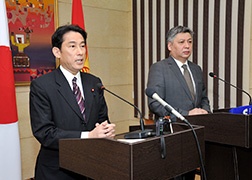 (1) At the beginning
Foreign Minister Abdyldaev welcomed Foreign Minister Kishida’s visit to the Kyrgyz Republic and welcomed activated exchange between the two countries in the recent years.
(2) Bilateral relationship/economic cooperation
Foreign Minister Abdyldaev stated that he regards Japan as a most important partner, and expressed the wish to steadily implement the agreement that had been reached in the time of President Atambaev’s visit to Japan in February last year, and the Kyrgyz Republic, as a democratic country, needs assistance from Japan as a country that shares values. In response to this, Foreign Minister Kishida expressed the position of the Government of Japan to continue assisting nation-building of the Kyrgyz Republic and conveyed the decision by the Japanese government that it would provide a total of approximately JPY 12 billion of yen loans for renovation of the highway and its disaster reduction following to the agreement between two countries to cooperate on acceleration of formulation of appropriate projects for resuming yen loans reached upon President Atambaev’s visit to Japan.
In addition to the above, Foreign Minister Kishida stated that the Government of Japan was considering grant aid in airport development, health care, and disaster reduction for which technologies of Japanese small and medium-sized enterprises can be utilized. Minister Abdyldaev, in response, expressed his gratitude for the past economic cooperation that Japan had provided to the Kyrgyz Republic.
(3) E/N signing
After the meeting, Foreign Minister Kishida and Ms. Olga Lavrova, Minister of Finance, signed Exchange of Notes on grant aid projects “Project for Improvement of the Equipment for Road Maintenance in Osh, Jalal-Abad and Talas Oblasts” and “Project for Human Resource Development Scholarship”. 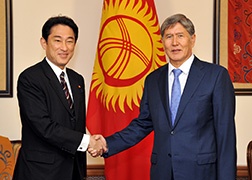 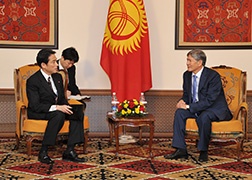 (1) At the beginning
President Atambaev welcomed the first visit to the Kyrgyz Republic by the Japanese Foreign Minister in recent 10 years and pointed out that Japan and the Kyrgyz Republic are spiritually close and they are democratic countries having the spirit of freedom.
(2) Bilateral relations/economic cooperation
Mentioning his respect to the people of Japan, President Atambaev gave an explanation on his ideas concerning enhancement of the relationship with Japan.
Foreign Minister Kishida expressed the policies of the Government of Japan to continue its support to efforts by the Kyrgyz Republic for democratization and conveyed the Japanese government’s decision that it would provide a total of approximately JPY 12 billion of yen loans for renovation of the highway and its disaster reduction based on the agreement to accelerate formulation of appropriate projects for resuming yen loans reached upon President Atambaev’s visit to Japan in February last year.

3 Meeting with Mr. Abdulaziz Khafizovich Kamilov, Minister of Foreign Affairs of the Republic of Uzbekistan 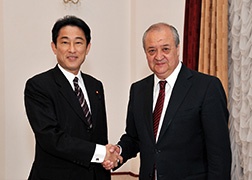 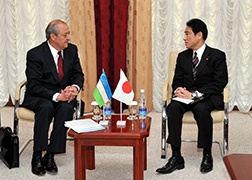 (1) Bilateral relationship
Foreign Minister Kishida expressed his expectation that economic cooperation from Japan would be beneficial for the development of Uzbekistan, stating that Japan emphasizes enhancement of partnership with Uzbekistan.
(2) Economic cooperation
The two foreign ministers shared their views on continuing prompt and strict efforts concerning the illicit case of Japan Transportation Consultants, including formulation of preventive measures, and Minister Kishida stated that Japan would consider future cooperation checking the progress of efforts by the Uzbekistan side on the case.

4 Mr. Rashid Meredov, Deputy Chairman of the Cabinet of Ministers and Minister of Foreign Affairs of Turkmenistan 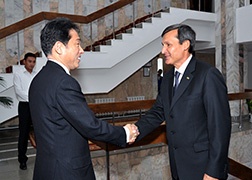 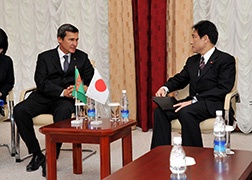 (1) Bilateral relations
Both ministers welcomed further progress of the bilateral relationship including private sectors after the visit to Japan by H.E. Mr. Gurbanguly Berdimuhamedov, President of Turkmenistan, in September last year. Moreover, both ministers welcomed the progress of projects, in which Japanese enterprises participate, and that was announced upon the president’s visit to Japan, and exchanged opinions on promotion of human exchanges for further progress of the relationship.
(2) International relations, “Central Asia plus Japan” dialogue
Regarding the situation in Afghanistan, the two ministers exchanged opinions on cooperation in the fields of anti-drug measures and border management.
In addition to the above, the two ministers shared their views on cooperation for the progress of the Foreign Ministers’ Meeting of “Central Asia plus Japan” dialogue together with Turkmenistan, the next chair country. 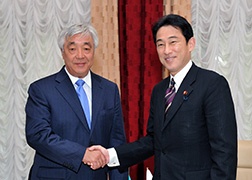 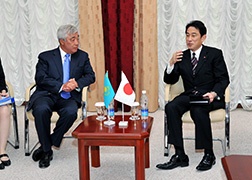 (1) Economic relations
Foreign Minister Kishida expressed his welcome on the start of operation of a plant of Toyota Motor Corporation in Kostanay and stated that he would like to expand cooperation with Kazakhstan on various occasions in an international arena in the future.
(2) Bilateral relations
Foreign Minister Idrissov, within the context of the economic relations, introduced the fact that Kazakhstan had recently introduced a unilateral visa exemption to countries including Japan. Highly appreciating the fact, Foreign Minister Kishida mentioned that some Japanese enterprises are interested in participating in the plan of construction of a nuclear power plant in Kazakhstan and stated that Japan was prepared to provide cooperation for reform efforts of Kazakhstan which aims at joining the leading 30 countries by 2050.
(3) Cooperation in an international arena
Foreign Minister Kishida highly appreciated Kazakhstan’s proactive efforts on global issues including disarmament and non-proliferation and expressed his welcome on the recent signing of the protocol concerning negative security guarantee of the Treaty on a Nuclear-Weapon-Free Zone in Central Asia by five nuclear weapon states, as Japan has been involved in the Treaty from drafting to its establishment.

(In addition to the above, Foreign Minister Kishida also had a conversation with Mr. Sirodjidin Aslov, Minister of Foreign Affairs of the Republic of Tajikistan, who visited Japan last June, with regard to the results of his visit to Japan.)