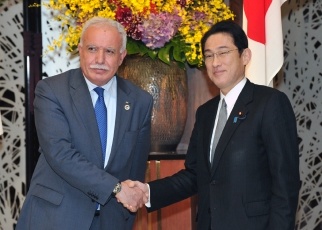 On February 16, from 6.30 p.m. for approximately 90 minutes, Mr. Fumio Kishida, Minister for Foreign Affairs, held a dinner meeting with Dr. Riad Malki, Minister of Foreign Affairs of the Palestinian Authority. An overview of the meeting is as follows.

1. At the start of the meeting, Minister Kishida stated that in this fiscal year’s supplementary budget, Japan will allocate 100 million US dollars to support Palestine, specifically for humanitarian and reconstruction support for Gaza following the conflict last summer, financial support for the Palestinian Authority, and support for job creation in the West Bank and assistance in the fields of medical care and health. Moreover, he said that Japan would continue to support Palestine through the Corridor for Peace and Prosperity initiative and the Cooperation among East Asian Countries for Palestinian Development (CEAPAD).

2. In response, Minister Malki expressed his gratitude for Japan’s comprehensive support of Palestine in a range of fields and its contribution to all Palestinians. He also stated that Palestine would continue to cooperate with Japan to advance the Corridor for Peace and Prosperity initiative.

3. Minister Kishida stated that in order to make progress in the stalled Middle East peace talks, he hoped that both sides in the peace process would rebuild a relationship of trust and respond flexibly toward resuming direct negotiations. Minister Malki expressed his hopes for Japan’s role in the Middle East peace talks and for its continued cooperation toward the realization of peace and the establishment of a Palestinian state at an early stage, based on a two-state solution.