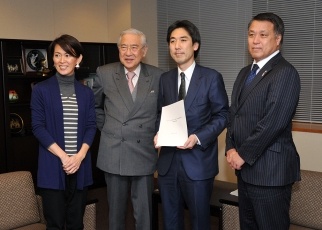 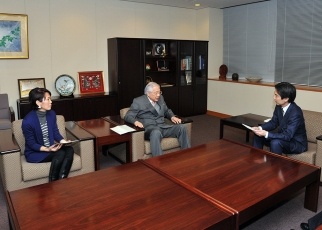 1. In the afternoon of February 4, Mr. Kazuo Ogura (Advisor, Japan Foundation), Chairman of the “Panel of Experts on Strengthening Sport Diplomacy,” submitted the “Final Report”(PDF)

2. The report describes the policies and measures that should be implemented by the Ministry of Foreign Affairs in coordination with the relevant ministries, agencies and organizations for the themes of development, peace building and relationship between sports and socially vulnerable persons, under the three pillars of “Diplomacy by Sports,” which utilizes the influence and attractiveness of sports for the enhancement of diplomacy; “Diplomacy for sports,” by which diplomatic authorities implement various efforts for the development of sports; and the establishment of a foundation to promote sports diplomacy.

3. Chairman Ogura stated that, with a view to measures to deal with the issues of peace building and development, sports diplomacy should be implemented from a wide range of perspectives, and also that the Panel hoped that the Ministry of Foreign Affairs would investigate policies to establish a foundation for sports diplomacy, such as appointing an ambassador responsible for sports. In addition, panel members Ms. Arimori and Mr. Tashima who were also in attendance commented that they hoped the Ministry of Foreign Affairs would continue initiatives to contribute internationally through sports.

State Minister Kiuchi expressed his gratitude for the efforts of the Chairman and the Panel. He also stated that based on the discussions of the Panel of Experts, the Ministry of Foreign Affairs intend to allocate a budget to promote sports diplomacy, that would result in the steady implementation of policies and measures in the future.