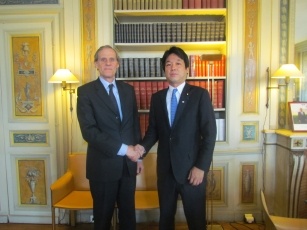 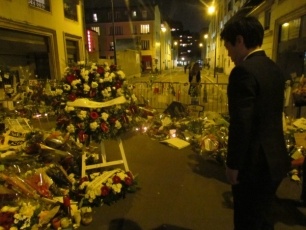 1. On January 22 Parliamentary Vice-Minister Sonoura held a meeting with H.E.Mr. Christian Masset, Secretary-General of the Ministry of Foreign Affairs and International Development of the French Republic. At the meeting, Parliamentary Vice-Minister Sonoura asked for stronger coordination and information-sharing with the Government of France in connection with the taking hostage of Japanese nationals in Syria, stated that Japan wants to cooperate with France to decisively combat extremism, which is posing a major threat to the international community, while confirming the cooperation between the two countries, once again extended Japan’s condolences to the casualties of the terrorist attacks in France and their families.

Firstly, Secretary-General Masset affirmed that the Government of France will cooperate toward the release of the hostages. He also expressed thanks for the expressions of solidarity from Japan at the time of the terrorist attacks in France, including from Mr. Shinzo Abe, Prime Minister, and Mr. Fumio Kishida, Minister for Foreign Affairs, and it was confirmed that based on the “exceptional partnership” between Japan and France, the two countries will continue to defend their common values. Secretary-General Masset also explained the new initiatives of the Government of France following the series of terrorist attacks in Paris.

2. Parliamentary Vice-Minister Sonoura also met with officials in charge of terrorism-related issues at France’s Ministry of Foreign Affairs and International Development and Ministry of the Interior and explained Japan’s fundamental position concerning the taking hostage of Japanese nationals in Syria, and once again requested cooperation, including the provision of relevant information from France. The French side confirmed that it will spare no effort in cooperating with Japan in order to resolve the incident, and appreciates Japan’s counter-terrorism initiatives in the Sahel region of Africa and elsewhere. The French side also explained counter-terrorism measures in France.

3. During his stay Parliamentary Vice-Minister Sonoura extended his condolences to the victims of the terrorist attacks in France, and offered wreathes and prayed for the victims in front of Charlie Hebdo’s offices, on the road nearby and at a Jewish food store, where shooting incidents occurred, and at Montrouge on the outskirts of southern Paris, where an police officer was murdered, respectively, as an expression of Japan’s solidarity with France.

4. From the standpoint of strengthening external communications in a strategic manner, Parliamentary Vice-Minister Sonoura utilized his visit to France to exchange views with Mr. Sebastien Lechevalier, Director of the France-Japan Foundation of the EHESS. He also visited the Maison de la Culture du Japon à Paris (MCJP) (The Japan Cultural Institute in Paris) and received an explanation from Dr. Sawako Takeuchi, President of the MCJP.