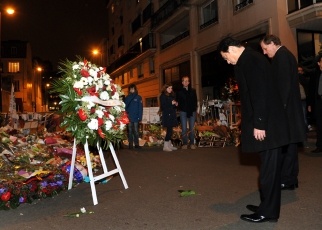 On January 18 (local time) Mr. Fumio Kishida, Minister for Foreign Affairs of Japan, who was visiting the French Republic, visited the site in front of Charlie Hebdo’s offices in Paris where a shooting terrorism attack occurred on January 9, and in the presence of Mr. Christian Masset, Secretary-General of the Ministry of Foreign Affairs and International Development of France (formerly Ambassador of France to Japan), he offered flowers and conveyed the following message.

1. Japan once again extends its condolences to the victims and their families, and expresses its solidarity with France.

2. Japan strongly condemns this attack, which challenges the fundamental values of freedom of expression and press and cannot be justified for any reason.

3. Nothing comes from a chain of violence and hatred. Moderation and pluralistic values must be respected.

4. Based on the “exceptional partnership” between Japan and France, Japan will cooperate closely with France while engaging in the fight against terrorism.