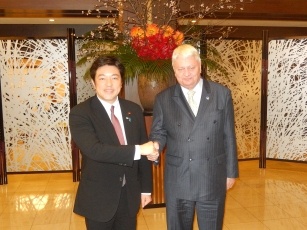 On January 13, Mr. Yasuhide Nakayama, State Minister for Foreign Affairs, held a meeting with Mr. Hervé Ladsous, Under-Secretary-General for Peacekeeping Operations. An overview of the meeting is as follows:

1. State Minister Nakayama stated that the United Nations Peacekeeping Operations are important activities for maintaining international peace and stability and the Government of Japan would more proactively contribute to UN PKOs. At the same time, State Minister Nakayama requested UN’s support for the Self-Defense Forces unit dispatched to the United Nations Mission in the Republic of South Sudan (UNMISS). In response to this, Under-Secretary-General Ladsous highly appreciated past proactive contributions by Japan to UN PKO and activities of the Self-Defense Forces in UNMISS.

2. Moreover, when State Minister Nakayama stated that as a concrete measure of an assistance of rapid deployment of PKO that Prime Minister Shinzo Abe had expressed in the Summit Meeting on UN Peacekeeping Operations held last September, the Government of Japan is now preparing 3.83 billion yen (approximately 40 million U.S. dollars) for the heavy equipment and training of its operation for the engineering unit of African countries, Under-Secretary-General Ladsous expressed his gratitude for the assistance from Japan.

3. In addition to the above, both sides exchanged opinions on efficient and effective use of PKO budget, active participation of Japanese staffs in the UN organizations, and other issues.