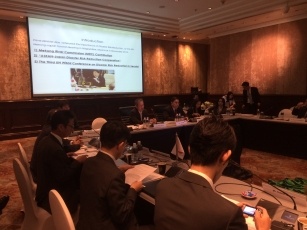 1. The Government of Japan and the Royal Thai Government co-hosted the 3rd Green Mekong Forum in Bangkok, Thailand, on 25 December 2014. The Forum was co-chaired by Mr. Chutintorn Gongsakdi, Director-General, Department of International Economic Affairs from the Ministry of Foreign Affairs of Thailand, and Mr. Shigeki Takizaki, Deputy Director-General for the Southeast and Southwest Asian Affairs Department from the Ministry of Foreign Affairs of Japan.

3. Japan and the Mekong region countries reaffirmed that public and private cooperation, including the engagement of local authorities, is extremely important in order to tackle environmental issues and climate change of the Mekong region. They also shared the determination to continue their efforts in the environmental field under the Mekong-Japan Cooperation’s Action Plan for ‘A Decade towards the realization of Green Mekong’ Initiative, with an emphasis on environmental protection with economic growth.

4. While urban development becomes more important given the rapid economic growth of the Mekong countries, the phenomenon of natural disasters is a challenging issue that the international community and the Mekong region are increasingly confronting.

5. The 3rd Green Mekong Forum was organized in at an appropriate time this year. It was held a day before a remembrance event entitled “Ten Years on : Remembering the Indian Ocean Tsunami” during 26-27 December 2014 in Phang Nga Province, Thailand, with an aim to raise public awareness and confidence in effective management of natural disasters. The outcome of the 3rd Green Mekong Forum will provide valuable inputs to the upcoming World Conference on Disaster Risk Reduction to be held in Sendai, Japan, in March 2015. It will also be reported to the 7th Mekong-Japan Summit in July 2015 in Tokyo.