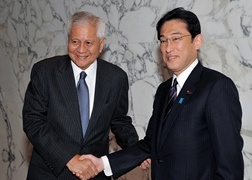 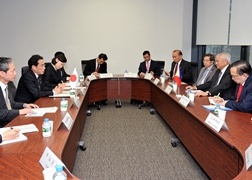 1. On November 17, commencing at around 1:40 p.m. for approximately 15 minutes, Mr. Fumio Kishida, Minister for Foreign Affairs, held a meeting with H.E. Mr. Albert F. del Rosario, Secretary of Foreign Affairs, Republic of the Philippines, who was on a visit to Japan to attend the Symposium Commemorating the 60th Anniversary of Japan’s ODA.

2. Minister Kishida welcomed Secretary del Rosario’s visit to Japan, and said Japan would like to further strengthen the “strategic partnership” between the two countries through close communication. In response, Secretary del Rosario said the Philippines also attaches importance to the strategic partnership with Japan, and he would also like to further strengthen the favorable bilateral relationship by communicating closely with Minister Kishida. In addition, the two ministers exchanged views on regional affairs andreaffirmed the importance of “the rule of law” at sea, including the South China Sea, and shared the view that they will continue to cooperate for the regional peace and stability. Furthermore, Minister Kishida once again explained the current state of Japan-China relations.