State Minister Yasuhide Nakayama Receives a Courtesy Call from a Delegation of Participants in the “Future Leaders Forum 2014: Japan- China-Korea” 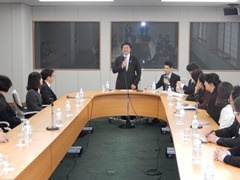 1. On November 6, Mr. Yasuhide Nakayama, State Minister for Foreign Affairs, received a courtesy call from a delegation of participants in the “Future Leaders Forum 2014: Japan- China-Korea,” which is organized by the Japan Foundation, All-China Youth Federation and the Korea Foundation.

2. At the beginning, State Minister Nakayama welcomed the delegation, along with mentioning the importance of trilateral cooperation among Japan, China and the Republic of Korea, and saying he wants the delegation members to utilize the outcomes of this forum, including the personal relationships that are fostered there, in their activities upon returning home.

3. In response, representatives from each of the participating countries (Japan: Keitaro Ohno, Member of the House of Representatives; China: Dong Xia, Deputy Secretary-General of All-China Youth Federation; ROK: Kim Dong-jo, Director for Policy Planning and coodination, Ministry of Foreign Affairs) reiterated the importance of trilateral cooperation among Japan, China and the ROK, and expressed their desire to make solid contributions via this Forum, which will play a part in cultivating the personal friendships that form the foundation for all partnerships.

4. Lastly, State Minister Nakayama said he hopes the delegation members greatly enjoy the Forum, and the courtesy call ended in a harmonious atmosphere.