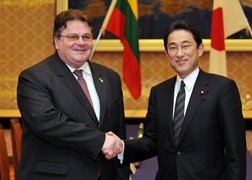 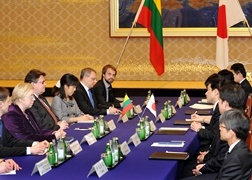 (1) Foreign Minister Kishida expressed his respect for Lithuania’s efforts in achieving democratization and market economy in about 20 years since its independence. Foreign Minister Kishida also stated that Lithuania’s importance in the international community was increasing, including its chairmanship of EU last year, and its current representation as the non-permanent member of the U.N. Security Council. He also stated Japan and Lithuania shared fundamental values.

(2) Minister Linkevičius agreed with Foreign Minister Kishida’s view , and replied that he was proud to be in Japan on March 11, which is also the anniversary of Lithuania’s independence, and to have been able to participate in a Great East Japan Earthquake memorial service. In addition, he stated that the ties between Japan and Lithuania became stronger as a result of the great achievements of Vice-Consul Chiune Sugihara, who had worked in Kaunas, where Minister Linkevičius was born, and that he was looking forward to developing bilateral relationship between the two countries.

(1) Foreign Minister Kishida stated that the development of cooperation in Chaghcharan in Afghanistan undertaken jointly by Japan and Lithuania was a good example of cooperation between the two countries. He also expressed his view that as a result of this visit to Japan, which followed the visit by Lithuania’s Minister of National Defence last month, the bilateral relationship in the security field was growing stronger, and he requested the understanding and support from Lithuania for Japanese Government’s policy of “proactive contribution to peace”

(1) Foreign Minister Kishida stated that it was important for the Russian Federation to hold direct negotiations with the interim Government of Ukraine, and to accept international monitoring teams to Crimea and the eastern part of Ukraine, without violating the sovereignty and territorial integrity of Ukraine. Foreign Minister Kishida also expressed his concerns over implementation of a referendum on March 16 by the Autonomous Republic of Crimea regarding the accession to Russia, and the heightening tensions in the eastern part of Ukraine. Foreign Minister Kishida then stated that changing status quo in Ukraine by coercion could not be accepted and the concerned parties needed to aim at peaceful solution of the situation.

(2) Minister Linkevičius agreed to Foreign Minister Kishida’s view and stated that the referendum on separation and independence of the Crimean Peninsula under the presence of foreign troops could not be justified and should not be recognized by the international community.

(3) Foreign Minister Kishida stated that he would aim at an early conclusion of a comprehensive and high-level economic partnership agreement (EPA) between Japan and EU. In response, Minister Linkevičius expressed his support, stating that the conclusion of the EPA is an issue of priority.