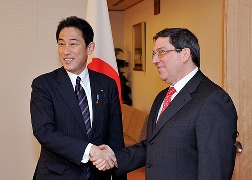 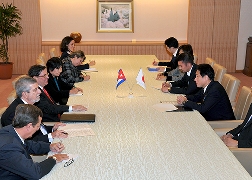 1. Minister Kishida welcomed the second visit of Minister Rodríguez to Japan, and noted that 2014 will be a milestone year, the 400th anniversary of the landing of the Japanese Keicho Mission in Cuba, which marked the beginning of exchanges between Japan and Cuba. Minister Kishida also expressed his hope that said conmemoration will lead to the further development of bilateral relations.

2. Minister Rodríguez praised the positive relations between the two countries, which are reflected in the regular holding of the vice-ministerial-level policy dialogues since 1998. Minister Rodríguez also expressed his satisfaction regarding the fact that the short-term trade insurance delinquent debt issue, which had been a concern for many years, has been resolved as a result of efforts by the relevant authorities of both countries, and that trade insurance transactions have resumed. Minister Rodríguez further expressed his hope that this development will encourage Japanese corporations to invest in Cuba and strengthen bilateral economic relations.

3. The two Ministers also exchanged views concerning bilateral as well as regional and international issues, including the situation in North Korea.