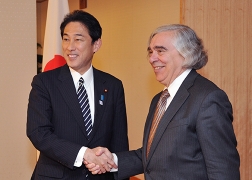 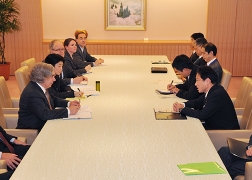 On October 31, Mr. Fumio Kishida, Minister for Foreign Affairs, had a meeting with Dr. Ernest Moniz, United States Secretary of Energy. The meeting started at 5:35pm and continued for about 30 minutes. The outline of the meeting was as follows.

1. Foreign Minister Kishida welcomed Secretary Moniz’s visit to Japan, and expressed appreciation on the efforts made by the US towards establishing a global nuclear liability regime for nuclear damage. Foreign Minister Kishida explained that the Government of Japan also recognizes the importance of joining the process of establishing such a global regime, and intended to work on concluding the Convention on Supplementary Compensation on Nuclear Damage (CSC) in order to improve the environment for foreign companies with expertise on decommissioning and countermeasures against contaminated water of the accident at the Fukushima Daiichi Nuclear Power Station to participate in related projects. Secretary Moniz welcomed Japan’s efforts in this regard, and both sides shared the view to promote detailed coordination concerning CSC.

2. Foreign Minister Kishida welcomed the recent approval of liquefied natural gas (LNG) exportation from the US to Japan, and asked for Secretary Moniz’s cooperation in obtaining early approval on the other two remaining projects in which Japanese companies are participating.

3. Both sides also exchanged views on issues such as bilateral cooperation in climate change.