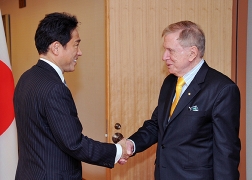 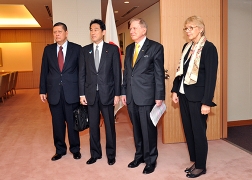 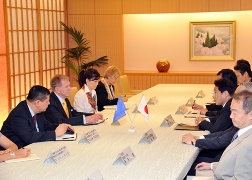 1. On August 28, commencing at 9:30 A.M. for about 15 minutes, Minister for Foreign Affairs Fumio Kishida received a courtesy call from the UN Commission of Inquiry (COI) on Human Rights in the Democratic People’s Republic of Korea (DPRK). The overview of the meeting is as follows.

3. Foreign Minister Kishida stated that he is concerned that serious human rights violations are taking place extensively and systematically in North Korea, and he conveyed that the abduction issue is matter of serious concern for the international community, and unless the abduction issue is resolved, Japan would not be able to normalize diplomatic relations with North Korea. Foreign Minister Kishida also commented that Prime Minister Shinzo Abe is determined to resolve the abduction issue during his administration. Chairman Kirby and other members of the Commission responded by showing respect to Prime Minister Abe’s determination to resolve the abduction issue, and stating that the issue of the abduction of foreign nationals by North Korea is a serious violation of human rights. The representatives of the COI also conveyed that they intend to further deepen their understanding of the situation by interviewing family members of the abductees and others during their visit in Japan. They then commented that they intend to be the voice of human rights concerns to the whole world because in resolving human rights issues, silence is not an option.

4. Lastly, Foreign Minister Kishida commented that he expects that the Commission’s visit to Japan will be a fruitful one. He also mentioned that although Japan will be making strong demands to North Korea, it is important for the international community to continue to make its voice heard, and that he anticipates that the Commission will play a role in this process.

* The foregoing is a provisional translation. The date indicated above denotes the date of issue of the original press release in Japanese.
Page Top
Back to Press Releases