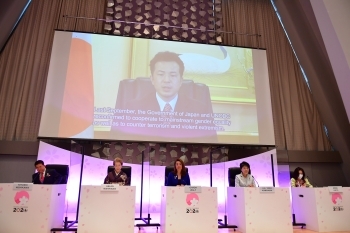 On March 7, Mr. UTO Takashi, State Minister for Foreign Affairs of Japan, attended the Ceremonial Segment of the 14th UN Congress on Crime Prevention and Criminal Justice (the Kyoto Congress) on behalf of the Ministry of Foreign Affairs of Japan. In addition, on March 8, State Minister UTO, delivered a video message (English translation (PDF)), at ''Women's Empowerment & Advancement of Justice,'' a special event of the Kyoto Congress, held by United Nations Office on Drugs and Crime, celebrating International Women's Day.

1 Participation to the Kyoto Congress

State Minister UTO participated in the Ceremonial Segment of the Kyoto Congress, where Her Imperial Highness Princess TAKAMADO and Mr. SUGA Yoshihide, Prime Minister of Japan, made a statement.

(1) In this event, the panelists actively discussed under the theme that women's further participation and empowerment are needed for the advancement of justice in the context of the Sustainable Development Goals (SDGs).

(2) Prior to the discussion, State Minister UTO stated in his video message that the importance of women's empowerment had been increasing in the COVID-19 pandemic, because it has ''heavily impacted women and girls''; domestic and sexual violence has become ever more serious and women and girls who are in difficult economic situations are more likely to be involved in various crimes, including trafficking in persons. He also mentioned that the Government of Japan and UNODC were cooperating to mainstream gender equality in this sense as well as to fight against terrorism and violent extremism.

(3) Moreover, State Minister said that the Government of Japan has been working further in cooperation with UNODC based on a concept of ''human security'' in which all life and dignity should be respected and build a better society where ''no one is left behind.''

Attachment: Message by State Minister UTO at a special event of the Kyoto Congress(PDF)